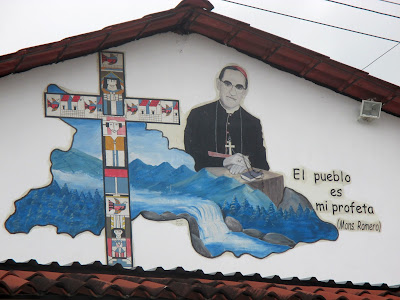 Today, March 24, is the 36th anniversary of the assassination and martyrdom of Salvadoran archbishop Oscar Arnulfo Romero.   He was slain by a marksman's bullet as he said mass in the chapel at the Divina Providencia cancer hospital in San Salvador.   Today he is officially called "Blessed" after his beatification by the Roman Catholic church on May 23, 2015.

To mark the anniversary, our friend Carlos Colorado has a blog post titled Blessed Romero's Unfinished Eucharist.  Carlos looks at what Romero was planning for the days and weeks following March 24:


In February 1980, Romero attended a spiritual retreat during which he examined his life and he resolved to take various steps to either address perceived failings, or to continue on the path that he had assessed to be the right path upon reflection. Romero devised a plan of action that included the following near term plans:
Additionally, Romero was planning to make a series of pastoral visits within El Salvador; to the northern zone, including Chalatenango in May 1980; to the central region including Quezaltepeque in October 1980; and to the western zone, including the artist commune at La Palma in February 1981. According to other reports, Romero had also raised the possibility of making a trip to Los Angeles, California, to continue to raise awareness and solidarity for his people and his church.

Rather than mourn what could have been, this snapshot of Romero’s prodigious planning should make us see Romero for what he was: a man of hope, a man of action, and a man constantly on the move. (more)

Thinking about what Romero might have done in those early years of El Salvador's civil war can lead us to wonder what he would do today as the number of daily killings of innocent civilians approaches the numbers of the war years.    How would his message resonate today?    We know his heart would ache for the pain of the Salvadoran people he loved so much.