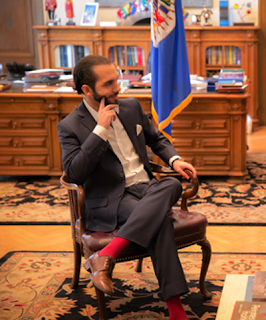 He was elected less than a year ago, but Nayib Bukele is already a different kind of mayor for San Salvador, and people are noticing.    At the end of last year, mayor Bukele was named by Forbes magazine's Mexico edition as one of the 25 most influential people in Central America for 2015.   The thirty-four year old businessman turned politician was easily elected in 2015, carried on a wave of popular support by the young people in the city.    Although Bukele ran as a candidate of the FMLN, he distanced himself from the party in a campaign focused on his own charisma and ideas and not based on party affiliation.

Since coming into office, he has not disappointed.    Under Bukele's guidance, the city government has focused on a series of projects aimed at quality of life in San Salvador.  The city's new infrastructure initiatives are performed under the slogan:  one thing done every day.   Some of those projects include:


This weekend Bukele signed a commitment with the Minister of Health for the city to donate the land for the construction of a new public hospital to replace the dilapidated Hospital Rosales.  (The National Assembly needs to approve borrowing the necessary funds before construction could begin).

Bukele has also shown himself adept at other touches.   For example, during the August festivals in San Salvador, city sanitation workers and their families were able to ride the carnival rides for free.   In June, Bukele showed up with city youth for Go Skateboarding Day, and announced a plan to build a skateboarding park.   He is donating his salary to provide scholarships for poor students.

As a result of what he has been accomplishing, Bukele now has the highest approval rating of any politician in El Salvador.   A recent CID-Gallup poll showed that 73% of the Salvadorans polled had a favorable view of the mayor, compared to only 9% having an unfavorable view.    The next closest politician was Oscar Ortiz, the current vice president and former mayor of Santa Tecla, with a 50% favorable rating.

The area for quality of life in the capital city where Bukele has less influence is crime and violence.   Policing in El Salvador is handled at the level of the national government, and the National Civilian Police (PNC) do not report to the country's mayors.

Unknown said…
not all of us living in San Salvador agree. Wining by only 3,500 votes an just 2% lead over a unknown candidate who also had a very lousy campaign, with an aggresive social media strategy targeting young voters, followed by more than 100,000 false twitter accounts, I think calling it an easy win is incorrect. However, his advisors are far ahead from the other party's in terms of selling his image an discrediting anyone who disagrees
11:58 AM

Unknown said…
Orlando Peña, the hate in your heart doesn't allow you to see.
12:12 PM

THE REPLYER said…
NOT IN A MILLION YEARS ARENA WOULD HAVE DONE WHAT NAYIB HAS DONE SINCE HE BECAME THE MAYOR EVERY POLL SHOW THAT MOST EL SALVADOREAN PEOPLE LIKE HIM AND WILL VOTE FOR HIM EVEN RIGHT WINGERS BUT THERE IS ALWAYS JELOUS PEOPLE LIKE YOU THAT TALK NONSENCE; AND IT WAS AN EASY WIN AND HE WILL WIN AGAIN OR IF HE RUNS FOR PRESIDENT HE WILL BE YOUR PRESIDENT LIKE IT OR NOT, SO WAIT FOR IT.


This is a joke right? Nacional Media called TCS is nothing huh? NO, TCS is not dedicated to favor an specific Politician.

Brijaby said…
I saw the truth hurt many people, but they need recognize that he is the best mayor that San Salvador has had in its history, it hurts those who hurt.
4:45 PM

Brijaby said…
I saw the truth hurt many people, but they need recognize that he is the best mayor that San Salvador has had in its history, it hurts those who hurt.
4:47 PM

Unknown said…
Sources Orlando Pena, I mean, you are assuring people that he has 100,000 false teitter followers, if you're just talking out of your ass, then your argument is null and void.
8:57 PM

Unknown said…
i have lived here in usa for more than 26 years and i hope one day go back to el salvador and see a better country.
6:15 PM

Unknown said…
i have lived here in usa for more than 26 years and i hope one day go back to el salvador and see a better country.
6:22 PM