Education in El Salvador at start of new school year 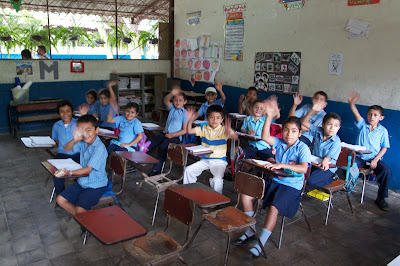 This week marks the beginning of a new school year for most students in El Salvador.   In an article titled  Education Reform in El Salvador: Progress and Challenges, the Council on Hemispheric Affairs looked at the state of the education system where those students will be learning.

As the COHA article points out, there are many challenges facing education in El Salvador:


Today, El Salvador has a population of about 6.1 million. Some 1,470,000 students were enrolled in primary and secondary school in 2014. That El Salvador has a large student population and a significant number of young people not attending school puts considerable pressure on the government to dedicate resources to improve school infrastructure, enrollment rates and security for students.

Improving school infrastructure remains a challenge. Students need a comfortable environment conducive to learning, but schools are chronically overcrowded. In rural areas, some children do not attend because the nearest school is far from their homes. Another thing keeping some children away from school is that gangs like MS-13 and Barrio 18 often recruit children in primary school.  Additionally, some of the schools damaged by earthquakes and hurricanes have not been repaired or replaced.

The article describes various government education programs to improve the situation, but notes that, although Sánchez Ceren campaigned promising to raise the rate of investment in education to 6% of GDP, his government has not been able to increase the level past 3.5%.  Low enrollment rates and high drop out rates remain a problem.  Partly this is caused by the crime problem in the country making families feel it is too dangerous to send teen-aged youth to school, particularly if they must cross a gang boundary.   Read the entire COHA article here.

In addition  to the points in the article, I would say anecdotally that the system also suffers from outdated educational approaches which focus mostly on rote memorization, which is partly due to inadequate teacher training and resources.   Also, too few hours are spent in school, even for students who are enrolled.   Public school days are only a half day long, with schools serving a morning shift and an afternoon shift of students.    The schools also find many reasons to have days off or to not hold classes throughout the year.

Salvadorans recognize the importance of education, but unfortunately the many other challenges facing the country have slowed progress in improving the system.
Education

Unknown said…
Wow, this is really interesting reading. I am glad I found this and got to read it. Great job on this content. I like it. quotes that will change your life