October 18, 2015
El Salvador loves soccer, but its national team has not fared so well on the world stage.   The country last qualified for the World Cup in 1982.   Perhaps the low point occurred in 2013, when 14 members of the team received lifetime bans from world soccer for participating in fixing games, and another 8 received long suspensions.

Today El Salvador's national team is reloaded with young players whose average age is 25.  El Salvador has turned to Honduran coach Ramon Maradiaga to try and right its fortunes and to try to qualify for the World Cup in Russia in 2018.  Maradiaga has formerly coached both the Honduran and Guatemalan national teams.

At the same time, the home field for the soccer team, Estadio Cuscatlan, in San Salvador is getting a makeover.    Despite the country's blue and white colors, the stadium has long been decorated in yellow and red.   Now the national stadium is being painted in shades of blue -- new colors to match the hope of a better future for Salvadoran soccer. 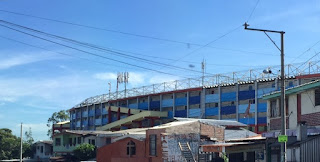 The new colors of Estadio Cuscatlan