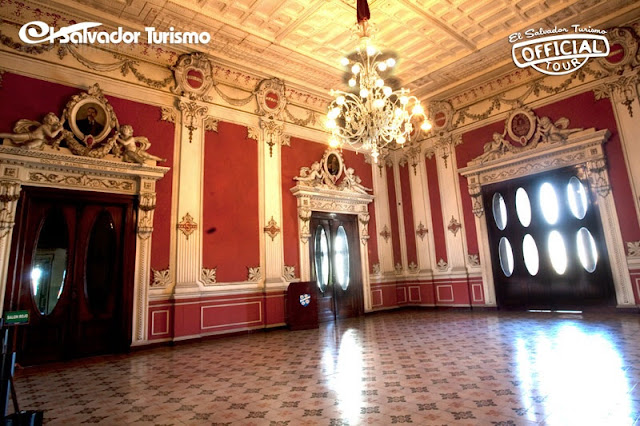 You don't often see sights in El Salvador featured in Conde Nast Traveler.   But this week, El Salvador's National Palace, in the historic center of San Salvador, was featured in an article titled In El Salvador, a Government Building That's a Landmark of Design, where the author wrote:

San Salvador's most imposing building is an unexpected destination for design inspiration, thanks to its interior of intricate and diverse tilework.

Although El Salvador doesn't have a monarchy, it does have a National Palace. Constructed in 1911 and declared a National Monument in 1980, the building used to house the major branches of government and was where important meetings and votes took place. Beyond its utilitarian purposes, the National Palace is also home to some of the most beautiful tilework this side of Lisbon, with each room home to different floor and ceiling patterns.

El Salvador's Ministry of Tourism has more information about the National Palace in a page on its website.   You still might want to keep in mind that the governments which ruled from this building, built with the revenues of coffee plantations, were no friends of the vast majority of the common people in those years.   One of its black memories was the military soldiers who fired from the roof of the National Palace into the crowds in the square below during the funeral mass of Oscar Romero.