A bleak picture is worth a 1000 words

June 24, 2015
According to a 2013 report on citizen security from the United Nations Development Program, El Salvador's prisons are the most over-crowded prisons in the Americas.   This graphic shows El Salvador's dramatic increase in overcrowding from 2005-2011 in comparison to other Latin American countries: 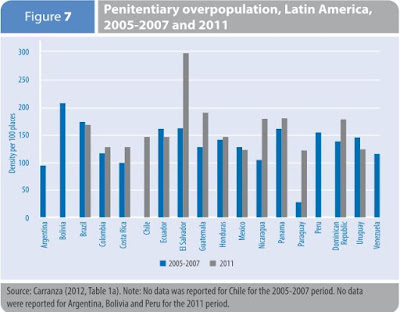 In 2012, ElFaro ran a graphic photo gallery on prison conditions and overcrowding.  Today in a photo gallery titled Here are the jails of El Salvador, the worst in America, ElDiario.es republished many of those photos again bringing into vivid detail the dehumanizing impact of such extreme overcrowding. The photos tell better than words why the idea of rehabilitation inside these prisons is far-fetched.