Ten days are left before the beatification of slain archbishop Oscar Romero in San Salvador on May 23.   The beatification solemnities will occur at Plaza Salvador del Mundo in an event to be attended by Roman Catholic cardinals, bishops from 15 countries, as many as nine presidents and heads of state, thousands of Catholic priests and hundreds of thousands of the faithful.

The beatification events have their own website here with versions in both English and Spanish with the public, and some might say watered down, presentation of what Romero's beatification is all about.


To get a feel for it, you can watch this video spot or listen to the beatification jingle.
To host the beatification mass and all of the visiting bishops and VIPs and priests, the plaza is being converted into a massive outdoor worship space: 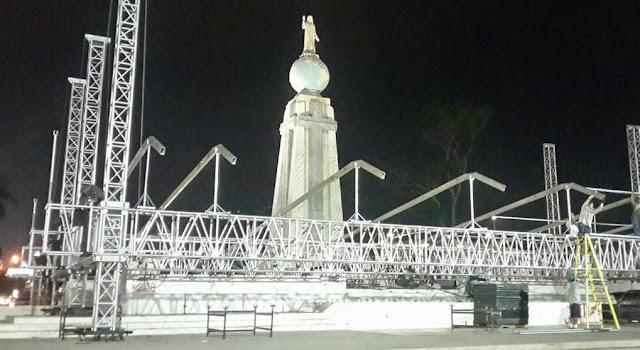 Estimates of how many people will attend have ranged from 260,000 to 500,000 or more.   No one really knows.   On the morning of May 23, a large section of the city extending out from Salvador del Mundo will be closed off to vehicle traffic with large video screens set up at strategic points along Paseo General Escalon:
Events will kick off on the evening of May 22 with a candlelight procession from the Metropolitan Cathedral followed by an all night vigil.   A procession commences at 9:30 a.m. to open the beatification rites, with mass lasting three hours from 10 a.m. to 1:00 p.m.   See the full  Schedule of events from the official website.
Producing an event this big, celebrating the life and example of a man who has meant so much to so many, was sure to generate some controversy.   Our friend Carlos X (Polycarpio) lists some of the controversies:
As Carlos says:

Who owns the legacy of Romero is a dispute that harkens back to the day he was buried, when leftist activists hung posters on the facade of the Metropolitan Cathedral specifying which bishops were not welcome at the ceremony. We can be sure that the beatification ceremony will not degenerate into the chaos of Romero’s funeral, where shooting and suspected bombs triggered a stampede, and forced thousands of clergy and faithful to take refuge in the Cathedral, still under construction at the time. Romero was hastily buried in a makeshift grave on the main floor of the church and was not moved to his tomb in the crypt until a decade later—and that transfer unleashed accusations that the Church had banished Romero, relegating him to “the basement”. In those days, jarring statements about Romero were often heard. When John Paul II brought up Romero in a private meeting with Salvadoran bishops, one conservative prelate reportedly said that Romero was responsible for all the Salvadoran civil war deaths.

And so perhaps it is inevitable that an event being assembled by the official Roman Catholic church of El Salvador, a church of both rich and poor, of the left and the right, would be a little bland when it comes to describing the actual history of the time.

It should also be remembered that there has never been justice in the case of Romero's assassination.  No judicial proceeding in El Salvador has ever sought to establish legal culpability.  As a result, organizations which seek justice for victims of human rights violations during the civil war will be marching to the offices of El Salvador's Attorney General to demand justice on Thursday, May 21.


Finally, for EVERTYTHING related to Romero's martydom and the beatification, go to Carlos' SuperMartyrio blog.