February 11, 2015
On March 1, Salvadorans will go to the polls for national elections.   They will be electing mayors, deputies to the National Assembly, and deputies to the Central American parliament.

Due to rulings by the Constitutional Chamber of El Salvador's Supreme Judicial Court, for the first time Salvadorans will be able to select deputies from different parties.   In the last election, if you selected a candidate from one party, you could not vote for any candidates from another party.   This year for example, voters in the department of San Salvador will choose 24 deputies from a menu of 173 candidates -- 24 candidates from each of 8 parties and one independent candidate. 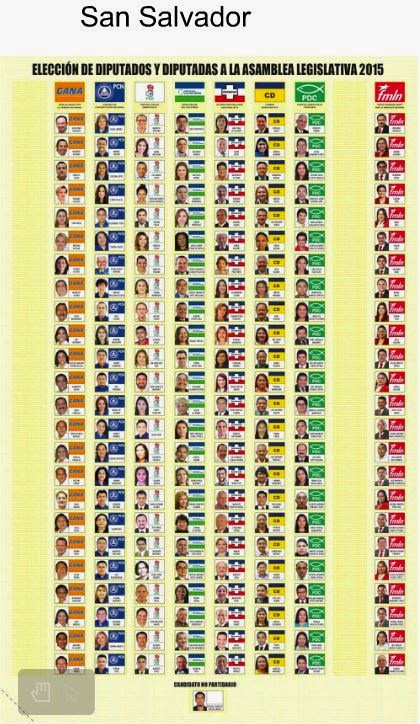 The Supreme Electoral Tribunal is in the midst of a public education campaign to explain these changes to voters.  The TSE ha set a tutorial on the rules for voting for citizens here with the caption "VOTAR ¡ES FÁCIL! -- Voting is Easy!"

You can see samples of the ballots when you click through this presentation from ISD.

Voting might be easy, but I don't think counting these new paper ballots will be.  Expect lengthy delays for the results on election night from the more populous departments.