Taiwan gave millions to Flores who gave it to ARENA

October 11, 2014
El Salvador's president from 1999-2004 was Francisco Flores.   During his presidency, two killer earthquakes hit El Salvador in early 2001 killing hundreds and leaving thousands homeless.   As the country worked to re-build following those quakes, the government of Taiwan delivered $10 million to Flores, with the purported explanation that it was intended for the victims of the earthquakes.

Flores is now under arrest and being held in jail on corruption charges.   His arrest came after it became clear that the millions did not go to earthquake relief, but until now we did not know where the money had actually gone.  In a story reported on October 2, the journalists at El Faro revealed that most of the $10 million had been doled out in dozens of checks to support the presidential campaign of ARENA candidate Tony Saca: 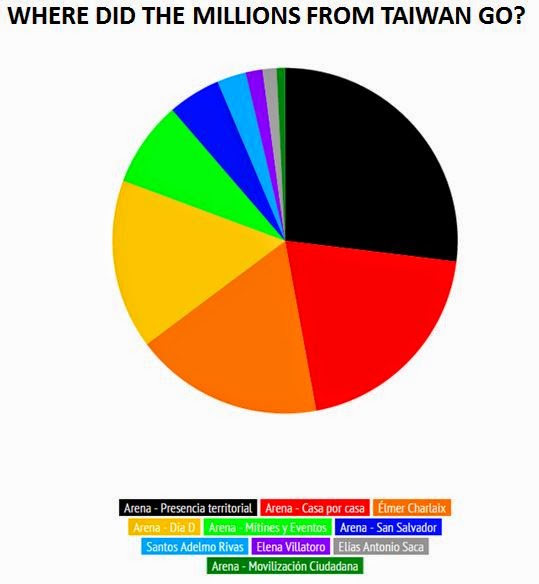 The money went into such efforts as Saca's "Casa por casa" -- "house by house" -- campaign effort, into ARENA rallies and events and "citizen mobilization."

El Faro obtained access to copies of 156 bank checks used in the Attorney General's investigation.   They show a specific effort to finance the presidential campaign of Tony Saca in 2003 and early 2004, including 41 checks to Élmer Charlaix, Saca's campaign manager who would later take a post in the Saca administration.

So far, only ex-president Flores, and not the recipients of his Taiwanese gifts, is being prosecuted for corruption.