In April of ths year, the price of a pound of beans in El Salvador was 50 cents;  last week the price had risen to levels between $1.10 and $1.35 in markets around the country according to La Prensa.Grafica.   The price rise is blamed on a shortage of beans.   Linked to the shortage is a lack of rain in some parts of the country, a weather problem blamed on the El Niño climate phenomenon.

(Meanwhile the ARENA party is alleging that any scarcity of beans is being caused by the FMLN government sending beans to Venezuela to pay for oil received from the socialist government there).

Farmers are concerned about periods during this rainy season when no rain has fallen for extended period of time in various parts of the country.   The most recent dry spell began on July 4.

The government has denounced hoarding of bean stockpiles by speculators and announced plans to buy beans on international markets to reduce shortages.

The government will spend $4.6 million to send additional seed packets to farmers affected by the dry conditions in 77 municipalities.

Map of moisture levels in soil shows eastern third of country impacted by lack of rain: 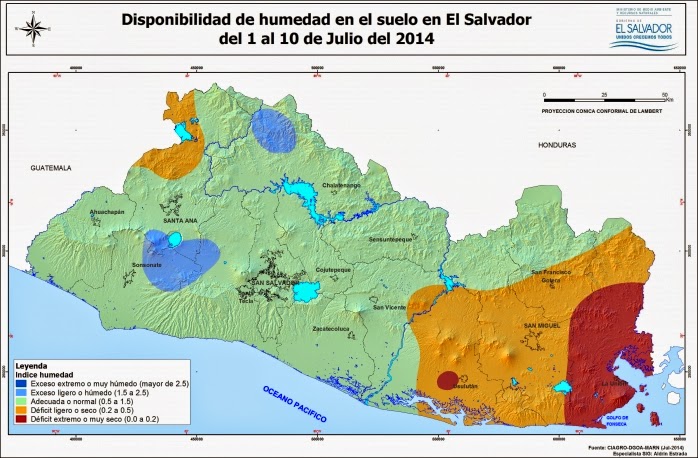 Unknown said…
Accueil - AFRIKAN DIASPORA CINEMA
ADC is a video on demand platform that produces and distributes its own films. We are located between Brussels and Paris . Composed of passionated of art in general : directors, photographers , actors , model photo, athletes, artists, musicians, singers, ... all united by the passion for cinema . Our ambition is to create a new film industry we call African cinema in the diaspora. We start with few resources but very large amibitions . And we will achieve our goal . We are determined. We produce the best films and series from the African diaspora . Thank you for your support