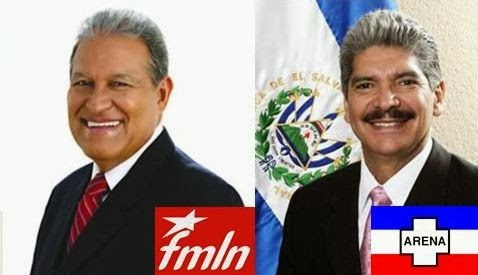 The second round of El Salvador's presidential election will be next Sunday, March 9.   The second round includes the two highest finishers from the first round voting -- Salvador Sánchez Cerén of the  FMLN on the left and Norman Quijano of ARENA on the right.   The winner of this fifth post civil war election will take office on June 1.   In this post I'll take a look at some of the coverage and issues going into Sunday's vote.

For a comprehensive overview of El Salvador's 2014 presidential elections including a look at previous elections, make sure and look at this entry from the World Elections blog.

The polls certainly suggest an easy victory for Sánchez Cerén and the FMLN in the second round.   Linda Garrett at Center for Democracy in the Americas has assembled a tally of all the recent polls, and Sánchez Cerén's lead ranges from 10 % to 18%.    In his blog Mike Allison points to questions asked in the UCA poll to explain ARENA's collapse:

According to the UCA's recent poll, roughly 30 percent of the voters made their mind up in the months before, including the day of, the election. At the same time, 66 percent of the respondents said that the accusations against Flores strongly influenced their choice of candidates. Flores seems responsible for turning a close race into a lopsided victory for Sanchez Ceren in round one. ARENA now has to convince the Salvadoran voters that they are a clean party, competent to govern. They get rid of their corrupt officials like Flores and Saca (cough, cough). I swear, everybody else is honest.

It's going to be really tough. So many respondents do not believe that ARENA should return to power (55 percent said no) and so many say that they would never vote for ARENA in March (46 percent said never).

Allison also has a nice overview of the elections following the first round results in World Politics Review titled  El Salvador Elections Show FMLN Hitting Its Political Stride Before Runoff.   He notes


One major difference with previous elections is that the FMLN now has the benefit of running on actual achievements in office. The FMLN and Sánchez Cerén could take credit for a variety of popular social programs that provided public elementary and middle school students with meals, uniforms and school supplies. The FMLN also worked to establish several “Ciudad Mujer” centers throughout the country that provide essential social services for women. The benefits from the ALBA-Petroleos de El Salvador partnership, in which several FMLN-run municipalities share profits from energy projects, might also have proved an electoral benefit for Sánchez Cerén.

Other looks at the FMLN and the elections include Seth Robins at Christian Science Monitor in an article prior to the election titled  El Salvador election: Is 'democratic revolution' fading?  which looks at the FMLN's challenges in moving from a guerrilla force, to the main opposition party, to the party in power looking for reelection.   The Brookings Institution has an article which is better than its horrible title, Concerns for Democratic Institutions in El Salvador After FMLN First Round Win.

Much more partisan views of the election process come from the left with this article at Truthout: Union-Backed Candidate Wins First Round in El Salvador Election  and from the right with Roger Noriega's piece in the Miami Herald titled Is El Salvador the next Venezuela?.

The World Elections Blog has this informative image showing the municipalities carried by the various candidates in the first round:

Sánchez Cerén  carried 13 or the country's 14 departments, trailing Quijano only in Cabañas.   Quijano outpolled Sánchez Cerén in a number of rural municipalities in the northern part of the country, as well as the municipality of San Salvador, its wealthier suburbs of Santa Tecla, Antiguo Cuscatlan and Nuevo Cuscatlan, and along the coast in Libertad.

Perhaps most interesting is San Salvador.   In 2009,   Mauricio Funes carried the municipality with 104,544 to Avila's 98,105 votes.   Five years later,  Sánchez Cerén received only 84,336 first round votes in the capital city, while Quijano, San Salvador's mayor, received 97,850 votes and Tony Saca received another 18,000 votes.   Funes' significant success in attracting the urban middle class in the capital city in 2009 has not transferred to his vice president, Sánchez Cerén.   But  Sánchez Cerén was able to recapture the municipalities to the east of San Salvador such as Mejicanos, Apopa, and Soyapango which had thrown out FMLN mayors and elected mayors from ARENA in 2012.

Earlier accounts of voter turnout, including this blog, described turnout as only 53%.   The country's election authorities have now revised that number up significantly.  Voter turnout in the election was actually 63% of the eligible voters according to the Supreme Electoral Tribunal, who said that the original count of 4.9 million eligible voters was overstated by 700,000 with hundreds of thousands of expired identity cards from people who had either died, left the country, or simply never renewed their cards.   (I don't think the TSE did a similar post-election review of the voting roll in the 2009 presidential elections, so I do not think one can compare this revised number with the similar reported turnout in 2009).

US solidarity groups had many delegations of election observers in the country on February 2 (including me).   Many of those observers have described their experiences of seeing a free and fair election process, including these articles:

There seems to be little doubt that the FMLN and Sánchez Cerén will win on Sunday.   The only question is by how much.  El Salvador will proceed to another 5 years of an FMLN government, but this time headed by a president from the traditional leadership of the party rooted in the civil war years.   The election outcome will continue El Salvador on path to the left.

The question is perhaps  "how far to the left?"    It is worth noting that after its losses in 2012, the FMLN only has 31 seats in the National Assembly, and can only legislate by making deals.   There is also the growing strength of the Constitutional Chamber in the Supreme Judicial Court which is helping protect democratic processes.   I don't think that the FMLN ruling the country is the FMLN of the 1990s and 2000s.    The rhetoric of the party is not of Marx, but of "social investment." The US is no longer denounced publicly by high party officials as the "evil empire."    The party wants a former Salvadoran army officer from the civil war to remain as Minister of Defense.   We will need to see how Sánchez Cerén and the FMLN fill other high government positions.   Much will depend on the 2015 legislative elections and whether the FMLN can gain back strength in the legislature as well.   Bottom line -- the trend in Salvadoran government affairs will have a more socialist bent, but do not expect to see any dramatic shifts.

There will be some ugly fighting within ARENA after this election.   The party has already removed former president Francisco Flores from any position of influence because of his scandals -- a move which is too little too late after allowing Flores to be a key campaign adviser up until the final month before February's first round voting.    Quijano's star is fading fast in the party, after being its greatest hope when he dominated the 2012 election for mayor in the capital city.    The party remains mired in its hatred of the FMLN and its cold war rhetoric, and needs new leadership if it expects to compete in the future.

What the elections will not accomplish is a solution to El Salvador's problems of gangs, crime and narco-trafficking.   The crime issue has not been the issue which has impacted voter's choice of a president, even though voters believe that it is the most important issue affecting the country.   Salvadoran voters did not decide based on this issue, because they do not believe that any of the parties have any good ideas for how to address crime.

Hodad said…
"The party remains mired in its hatred of the FMLN and its cold war rhetoric, and needs new leadership if it expects to compete in the future" great quote on CSM
you are a good guy Tim thanks