The process of checking each of the 10,445 "actas" or tally sheets on which the votes are recorded in El Salvador's presidential election begins this morning.   There will be 23 work tables made up of election officials, and representatives of the Attorney General, Human Rights Ombudsman and the political parties. 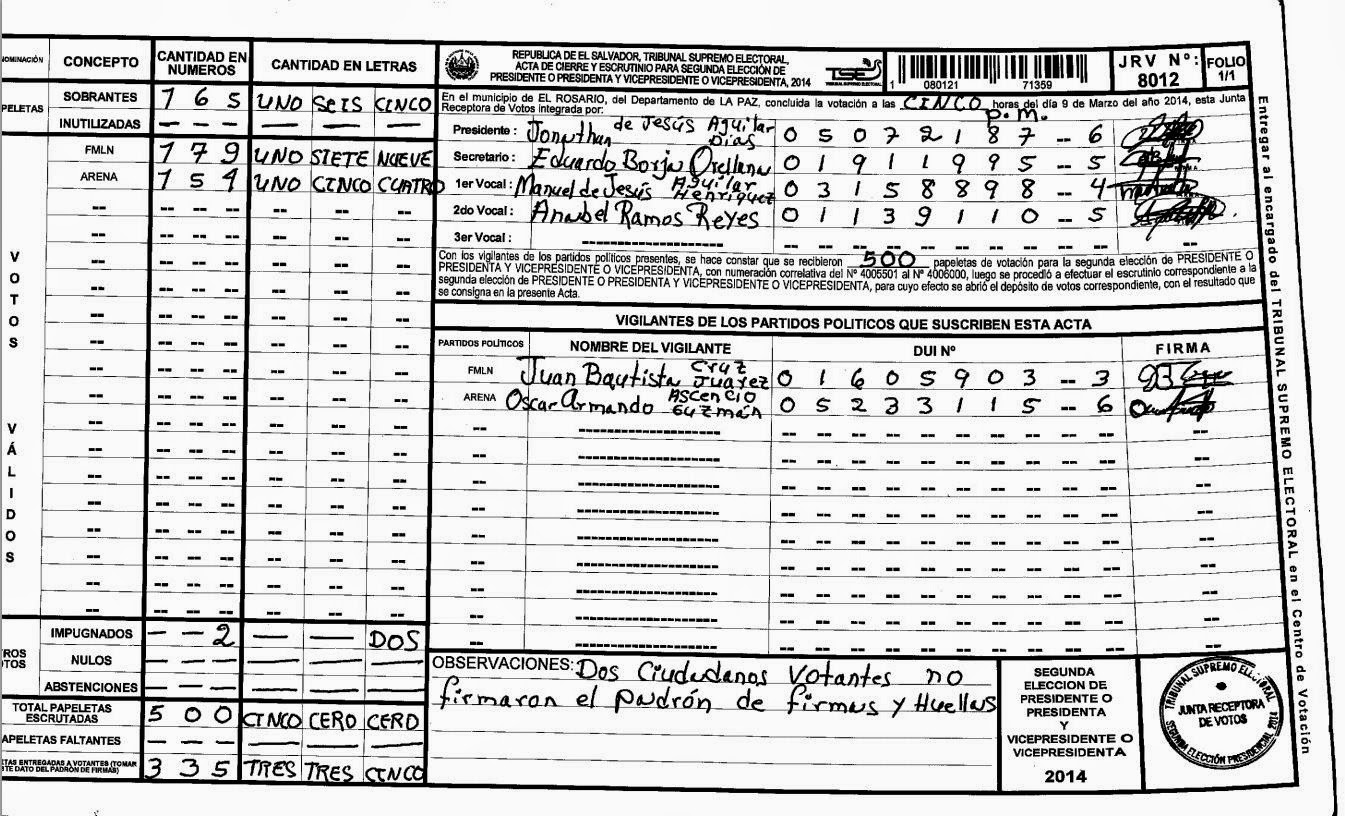 I was an election observer in the community of Nahualapa in El Rosario, La Paz, to watch the vote counting which led to the filling out of this specific form, and I can vouch that it was filled out in accordance with the vote count.   It is also important to note that the form is signed at the top by the four election officials from the table  (two from each party) and by the election monitors from each party in the middle.

The final scrutiny which begins today involves an inspection, not of the individual ballots marked by the voters, but of the actas, to determine if the preliminary vote tally recorded by the TSE matches what is actually recorded on these sheets.    The scrutiny uses the original actas, rather than the copies which were scanned and sent by internet to the TSE on Sunday night for the preliminary vote count.  The official law governing the final scrutiny is set out in Articles 214 and 215 of the Electoral Code of El Salvador.

In particular, the TSE has indicated that there were 14 actas which could not be processed in the preliminary count Sunday night for various reasons including the lack of a proper seal, scratchouts, or inconsistencies.   These actas correspond to 3370 votes,  not enough to tip the election to ARENA.

You will note that there are two votes listed on the acta above as "impugnados" or disputed on this acta.   These are ballots where the officials could not agree if there was a valid vote.  Nationwide there were 4191 of these disputed votes.   These ballots are segregated from the others, and will be examined by the TSE only if the margin between Quijano and Sánchez Cerén is less than 4191 after re-examining all the acta tally sheets.

I do not know what will be done by the observations on actas like the form above which has an observation that two voters had not signed the signature book recording that they had voted.

In my view, it is quite unlikely that this "final scrutiny" will change the results, and Salvador Sánchez Cerén will be announced as the winner by the TSE.   What remains to be seen is how ARENA will react, whether through legal challenges or something else.

Unknown said…
This is really helpful for understanding how the review works. Thanks for sharing Tim!
10:43 AM

Robert said…
Thanks Tim! This is all very helpful (even for some of my Salvadoran friends!)
11:52 AM