An enormous cloud of volcanic ash spread west from the Chaparrastique volcano near San Miguel after an eruption Sunday morning.   The explosion at one of El Salvador's most active volcanoes sent ash some 5 kilometers into the air.   By mid-afternoon, ash was starting to arrive in the greater San Salvador area.

At 5:15, MARN was reporting that the volcano was only emitting gases and not ash and the level of seismic activity within the volcano had declined.   Still, the population was warned to be on the alert for additional possible eruptions.


Civil protection authorities said they would evacuate people from within three kilometers (1.9 miles) of the volcano and set up emergency shelters.

"The evacuations began almost right after the explosion," said civil protection official Armando Vividor. He said some 5,000 people lived around the volcano.

The volcano, which is about 140 kilometers (86 miles) to the east of the capital, spewed ash over a wide area and the smell of sulfur hung over surrounding towns, according to reports on social media. Authorities recommended breathing through moist handkerchiefs.

Santos Osorio, a member of a local coffee growers union, said heavy ash was falling in the area and local coffee plantations would be checked for damage.

The eruption was captured in dramatic video:

Video of initial moments of eruption.


Another video of the eruption.

There are no reports of lava or anyone suffering burns.   El Diario reports that 3600 people have been evacuated from around the crater.   There were reports on Twitter that pharmacies were charging $1.50 to $2.00 for surgical masks that normally sold for 35 cents.   Ash caused some flights into El Salvador's international airport to be canceled this afternoon.

It is obviously too early to start tallying damages.  If there are rains in coming days (it's the dry season but there is a chance), the ash can become like cement.   Coffee and crop land  damaged.   Heavy rains could produce landslides.   The ash can pollute water supplies.

Images of the ash covered landscape: 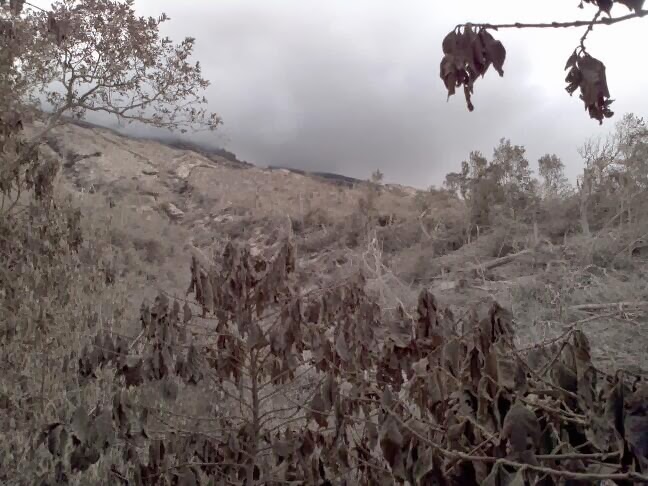 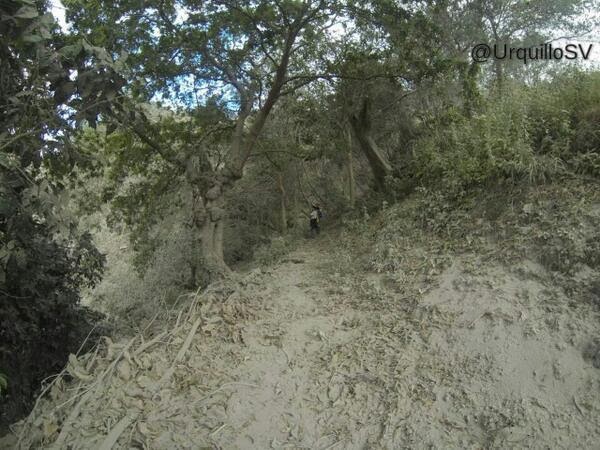 Tweets concerning the eruption can be found using hashtag #chaparrastique.

Branches of Salvadoran government dealing with the emergency provide updates on their websites:


Background information on the large Salvadoran volcano is available from the Smithsonian Global Volcanism Progam:


The symmetrical cone of San Miguel volcano, one of the most active in El Salvador, rises from near sea level to form one of the country's most prominent landmarks. The unvegetated summit of the 2130-m-high volcano rises above slopes draped with coffee plantations. A broad, deep crater complex that has been frequently modified by historical eruptions (recorded since the early 16th century) caps the truncated summit of the towering volcano, which is also known locally as Chaparrastique. Radial fissures on the flanks of the basaltic-andesitic volcano have fed a series of historical lava flows, including several erupted during the 17th-19th centuries that reached beyond the base of the volcano on the north, NE, and SE sides. The SE-flank lava flows are the largest and form broad, sparsely vegetated lava fields crossed by highways and a railroad skirting the base of the volcano. The location of flank vents has migrated higher on the edifice during historical time, and the most recent activity has consisted of minor ash eruptions from the summit crater.

There is also a Chaparrastique volcano page at VolcanoDiscovery.com.  A thesis paper titled San Miguel Volcano and its Volcanic Hazards by Carlos Escobar details the geology and risks associated with the volcano.  You can also review a chronology of activity at the volcano (in Spanish).

Description of effects of ash on human health.  (in Spanish)

The last major eruption of a volcano in El Salvador was the 2005 eruption of the  Ilamatepec volcano.