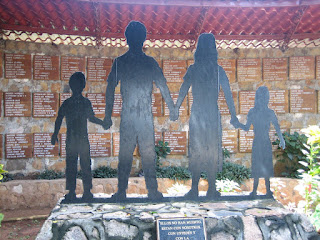 Memorial to the victims of El Mozote, the majority
of whom were children of school age or younger.

Last week I took a group of 8 North Americans and 13 Salvadorans to the site of the El Mozote massacre in Morazan Department.   Other than one of the Salvadorans, I was the only person who had been to the site before.  The group was powerfully affected by the tale of the massacre, as told by a young woman who had lost more than a dozen relatives in the killing.

The military commander of the unit which carried out the massacre was Colonel Domingo Monterrosa.   Not only did he give the orders, but witnesses recount that he came to El Mozote that day in 1981 while the killing was being carried on.  (Mark Danner, The Truth of El Mozote, The New Yorker, December 6, 1993).

Monterrosa died in October 1984, when a helicopter he was travelling in exploded over the hills of Morazan.   My group also visited the Museum of the Revolution, operated by the FMLN in Perquin.   There a former guerrilla combatant stood by what he said was the wreckage of the downed helicopter and told how Monterrosa had been tricked into loading a radio broadcast transmitter filled with explosives into his helicopter.   The guerrillas had taken advantage of Monterrosa's dogged pursuit of the rebel radio station, Radio Venceremos, and let him believe he had captured it when his troops found the booby-trapped transmitter.   The guerrillas exploded their bomb as the helicopter flew off with Monterrosa inside.

You can read the story of the trap laid for Monterrosa in the memoir of Carlos Consalvi, known as Santiago, when he ran Radio Venceremos.  The memoir is entitled Broadcasting the Civil War in El Salvador: A Memoir of Guerrilla Radio.

When Salvadoran president Mauricio Funes came to El Mozote in 2012 on the 20th anniversary of the signing of the 1992 Peace Accords, one of the things he declared was that the military should stop celebrating human rights violators as heroes.  Anyone listening knew that one of the figures he was referring to was Monterrosa.  The president's directive has been ignored by the military of which he is the commander-in-chief.

As you drive through San Miguel on the Pan American highway, you pass the military base of the third army brigade.   In large letters, the base proclaims its name -- Colonel Domingo Monterrosa.   If your "seres queridos", your loved ones, were raped, machine-gunned and killed by savage troops under Monterrosa's command, how must you feel when you drive by that base and see his name displayed in a place of honor?

The army came again to Morazan last week.   The army came to commemorate Monterrosa.   This was the 29th anniversary of his death.   El Faro has the story of the event.   Military commanders from the eastern part of the country, came to the town of Joateca, to watch a military drill show and horse teams, as they memorialized the death of one of the army's mythic figures.

There is a website dedicated to celebrating Monterrosa's exploits. On the related blog, there is a revisionist history of  Operacion Rescate (Operation Rescue) as they call the military action in El Mozote in December 1981.   The authors of the site claim that civilian victims were a result of the guerrillas using them as human shields, and alleging that the guerrillas had brought in corpses of children from other areas to deceive western journalists.   The old propaganda of El Salvador's military machine (and the Reagan administration) during the civil war lives on in these web pages.

For those of us for whom Oscar Romero is a one of the great world figures dedicated to human rights and bringing a voice to the voiceless poor, the honor paid to Roberto D'Aubuisson, the founder of the ARENA party and the man who ordered Romero's assassination is confounding.   For those of us who see the massacre of hundreds and hundreds of children at El Mozote as a war crime and an atrocity, the honor paid to Monterrosa, the commander of that massacre, is equally horrific.

There is no common understanding of what the country suffered during the civil war.  In El Salvador, the FMLN operates its museum with Monterrosa's downed helicopter, and the Museum of Word and Image, led by Carlos Consalvi has displays telling the story of the El Mozote massacre.    In another part of San Salvador, a museum dedicated to the country's military history dedicates two rooms to celebrating the exploits of Monterrosa and José Azmitia Melara, another of the Mozote commanders.    And in a remote town in northern Morazan, the bones of the victims of the war's worst atrocity tell a silent tale of their own.

Greg said…
In August/September 1993, I interviewed Gilberto Osorio, a commander with the PRTC during the war.

The interview appeared in the U.S. Special Operations journal "Behind the Lines" along with several others.

One of the operations conducted by Osorio and related during one of our many conversations was the successful assassination of Domingo Monterosa.

Osorio described having been trained in Cuba in the use of explosives and then, upon returning to El Salvador, further taught improvised munitions / explosives to FMLN guerrillas.

According to Osorio, who fought under the name "Geraldo Zeleya", the plan to kill Monterosa was carefully thought out, prepared for and then executed.

Essentially, the FMLN, knowing Monterosa was rabid on the subject of Radio Venceremos, began a battle that focused on the rumor the broadcasting station was at the epicenter of the engagement and at risk.

Creating the bomb and building it in to some old broadcasting equipment, Osorio described how the FMLN spread real time information back to Monterosa's headquarters that led him to believe the radio station had been attacked and destroyed.

Monterosa was predicted to want to see the results for himself and indeed, as history shows, he flew personally to the site where the "destroyed" broadcasting equipment had been staged by the guerrillas.

Osorio told me he was part of the select team overwatching the site and when the radio equipment was loaded onto Monterosa's helo, and it began to lift off, the team detonated the explosive by remote control (line of sight signal).

I have no reason not to believe Osorio as he also described, in equal detail, the sapper led attack on CEMFA in La Union and the attack on El Pariso during which SSG Greg Fronius was killed -his wounded body blown up by sappers from JP-28, a sapper element trained in part by Osorio and based on the North Vietnamese model.

Battlefield justice was indeed served by the killing of Monterosa with reference to the mass murder carried out by he and his battalion at El Mozote. Both he and the Atlacatl Battalion had become a rogue unit which answered to no one to include the U.S. political and military presence then in El Salvador.

U.S. Special Forces advisers were prevented from being permanantely imbedded with the battalion due to its increasingly brutal war fighting philosophy and actions. They were also at physical risk given their mandate to report human rights violations by ESAF forces.

Sadly, both the former FMLN armies such as the FPL and PRTC as well as the Salvadoran Armed Forces today celebrate executioners coming from both sides. Hence the General Amnesty demanded in the 1992 UN mediated peace agreement. No one with blood on his or her hands could risk being brought to judicial justice once the smoke from the battlefield had cleared.