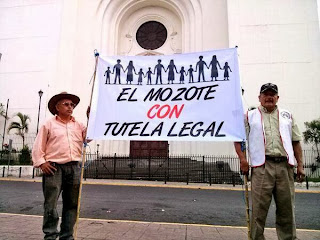 The abrupt closure on September 30 of Tutela Legal, the human rights legal aid clinic of the Catholic archdiocese of San Salvador, continues to reverberate among the human rights community.

The office of the archbishop offered varying explanations for the closure as the week progressed. On the day of the closure, the explanation given was that Tutela Legal no longer had a reason to be. In a press release issued later in the week, the archdiocese stated that the closure of the offices had been done after an investigation and for the purpose of assuring a better way to safeguard, accompany and defend the rights of victims. Finally, in a press conference on Friday, Archbishop José Luis Escobar Alas stated that the office of Tutela Legal had been closed because of various "irregularities" which had been discovered in its activities. The prelate declined to provide more specifics or identify any particular employees of Tutela Legal who had been involded.

Human rights groups loudly expressed their concerns about the safeguarding of the archives of Tutela Legal. Those archives contain perhaps the most extensive documentation of human rights abuses perpetrated during the decades of the 70s and 80s El Salvador. Organizations supporting victims petitioned the National Assembly to declare the archives a "national patrimony" and subject to protection of the estate.

The SHARE Foundation, a US-El Salvador solidarity organization, issued a statement on its website describing the October 5 statements of Salvadoran and international human rights groups:

The international solidarity press release signed by over 30 organizations, including all the historic U.S.-El Salvador solidarity organizations as well as the Center for Justice and Accountability, School of the Americas Watch, Sojourners Magazine, Friends of Co-Madres, and the National Lawyers Guild Task Force on the Americas, expressed outrage at the closure of Tutela Legal and concern that Tutela Legal’s archives be respected. The statement emphasizes solidarity with the first two key demands of Salvadoran civil society: a guarantee for the security of all of Tutela Legal’s records and access for the victims, and secondly, to reverse the decision to close the legal aid office, to reinstate the staff members fired unjustly, and above all to maintain the same spirit of work instilled by Archbishop Romero and Archbishop Arturo Rivera Damas, and Dr. Maria Julia Hernandez. Full press release in English here: FINAL International Solidarity Tutela Legal ENGLISH-1.

In the spirit of these path-breaking leaders, the press conference continued with powerful songs to commemorate Monsenor Romero, as well as chants that proceeded in call and response, for example, “Long live the Christian Based Communities,” with others responding “Qué vivan!” It was a moving experience, that all participated in. To close, the chanting continued, building momentum and encouraging the Archbishop to fulfill his rightful position on “the side of the poor,” to follow those that paved the way for him.

You can watch a video of a statements at the press conference being read by Bethany Loberg of SHARE and a representative of Pro-Busqueda.

El Salvador's Human Rights Ombudsman ("PDDH"), David Morales, issued a pronouncement that the archdiocese must take steps to preserve the archives and that the office of the PDDH should be given access to the archives to ensure the files are safeguarded and available for future investigators. Morales was formerly a lawyer in Tutela Legal, and argued for Tutela Legal in front of the InterAmerican Court on Human Rights in the human rights case brought against the Salvadoran government arising out of the 1981 massacre at El Mozote.

On Sunday, October 6, hundreds of people gathered at San Salvador's Metropolitan Cathedral to protest the closing. They encircled the cathedral, arm in arm, to give a symbolic "abrazo" or hug to the church where Oscar Romero, who founded Tutela Legal more than 30 years earlied, lies entombed.

You can see pictures from the event here.

I don't think anyone has actual information about the "irregularities" of which the archbishop has spoken. It is hard to imagine what kind of problems would be best solved by the immediate firing all of the employees of a human rights legal clinic which has served the poor of El Salvador for decades.

The hierarchy of the archdiocese clearly takes the position in these situations that it will act first, and offer explanations later. The parallels to the destruction of the Fernando Llort mosaics on the façade of the Metropolitan Cathedral are telling. The church destroyed, without advance notice to the artist or anyone else, an important cultural work and legacy commemorating the common soul of El Salvador. The reasons for the destruction then evolved almost daily as cries of disbelief were heard everywhere. This week the church destroyed, without advance notice to the lawyers or anyone else, an organization which did incredibly important work documenting the country's tragic history of human rights abuses. The explanations now are evolving as the protests mount. Regardless of the merits of either decision, Fernando Llort and the past and present employees of Tutela Legal, were entitled to better.

Today, the Metropolitan Cathedral faces the square where so many innocents were gunned down by government forces with a whitewashed façade. Let us hope that the closing of Tutela Legal is not another instance of whitewashing.

Carlos X. said…
Archbishop Escobar's decision has reminded me of Pope Francis. In The Big Interview (with Jesuit publications around the world), the Pope reflected on his management style while he was Provincial Superior of the Jesuits in Argentina (1973-1979). Reflecting rather frankly on his management style, the Pope said, “In my experience as superior in the Society ... I did not always do the necessary consultation. And this was not a good thing.” He added, “My authoritarian and quick manner of making decisions led me to have serious problems and to be accused of being ultraconservative ... I have never been a right-winger. It was my authoritarian way of making decisions that created problems.” As I write in my blog, the closure of the human rights office does not jump out as being outside the range of actions of previous archbishops. For example, Archbishop Arturo Rivera y Damas set up “Tutela Legal” precisely after closing the “Socorro Juridico” that Archbishop Romero had established, when Rivera wished to impose a more “moderate” line over the human rights work of the archdiocese. (This NYT story may contextualize the history.) As you've noted here, Tim, Archbishop Fernando Saenz Lacalle also stirred controversy by dismissing the then director of Tutela Legal (David Morales), also over differences in direction. If there is a silver lining in this story, it's that the attention that the closure has generated highlights the great awareness that has been created in the area of ​​human rights in El Salvador, which provides reason to be hopeful that the crisis will be diffused when all parties approach the issue with reflection.
7:23 PM