Economics and the mining struggle in El Salvador

August 13, 2013
There were a few victories claimed by the anti-mining movement in El Salvador in the past few weeks.  Those victories are more about economics than about the environmental impact of gold mining.

The economics lesson is this -- the Commerce Group's appeal was never a threat.  I always had to chuckle at my friends in the environmental movement who have kept portraying this case as a threat to the resumption of mining in the country.   If the case had any chance to succeed, the Commerce Group would have found a way to raise the necessary $150,000.   After all, this is supposed to be a $100 million claim.   The fact that Commerce Group could not find anyone willing to make such a bet shows how little merit investors saw in the claim.

The anti-mining movement also celebrated the news that GoldCorp. was suspending its operations at the Cerro Blanco site in eastern Guatemala.   These mining operations are viewed as threatening the water of the Lempa River, the most important watershed in El Salvador.   GoldCorp has posted the following statement on its website:

In light of recent declines in the metals prices the Company has indefinitely suspended work at Cerro Blanco.  Care and maintenance activities will continue at site and project development plans will be revisited as market conditions warrant.

You can see the significant decline in gold prices from their peak in 2011 in this chart: 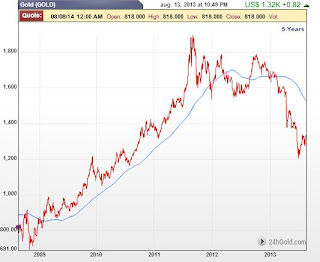 The other part of this story is that protests and opposition to the mine increased the cost of putting the Cerrro Blanco mine into operation.   Basic economics -- if the price is too low or the costs are too high to make a profit, the mine will not open.   But the absence of a law or regulation preventing the mining leaves open the possibility that a rebound in the price of gold will prompt a return of Cerro Blanco gold mining.
Mining

Register your free account now and get 4 g's of free silver as a joining bonus.
9:46 AM