Looking at where murders happen

July 18, 2013
Juan Carlos Garzon, a visiting expert at the Woodrow Wilson International Center for Scholars, has published an article at the InsightCrime website titled What Does El Salvador's Homicide Distribution Say About the Gang Truce?.   Garzon has done a more detailed analysis of homicide data, than is often available, with a specific look at how homicide rates vary among municipalities and and how they have changed before and after the gang truce.  He writes:

It is undeniable that the gang truce between El Salvador's two biggest gangs -- the MS-13 and the Barrio 18 -- produced a drastic fall in homicides at a national level, from a rate of 72 homicides per 100,000 residents in 2011 to 32 per 100,000 in 2012. Nonetheless, a more detailed analysis of lethal violence, using statistics from the National Police, shows the following:

ii) Gradually, as time has passed, the number of municipalities in which homicides are increasing has risen.

iii) In the same way that homicides rapidly decreased, a new spiral of violence could abruptly begin. Alerts have been raised about a process of escalation that, if not contained, could take the country back to levels of violence similar to those seen prior to the truce.

You can read the full article here.    The analysis is based on a dataset of homicide statistics from the PNC which is available here if you want to make your own study.

When I looked at the dataset, another pattern stood out -- the distribution of homicides between urban and rural areas has been steadily shifting from the urban areas to the countryside over the past six years: 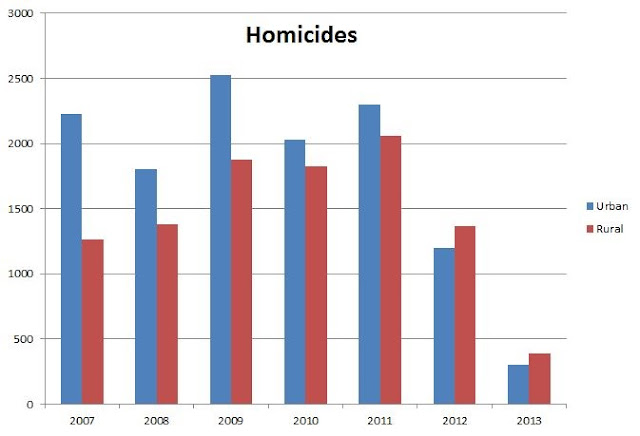 In 2007, there were roughly two urban murders for every one murder in the rural areas.   But by 2013, the number of murders committed in rural areas exceeds those in the urban centers.     This shift matches what I have heard anecdotally, that the maras have been gradually moving out of urban neighborhoods and into rural communities, pushed there by police sweeps and military patrols.

Ultimately statistics can never give us more than patterns and suggestions of what may be happening.   Since most murders go unsolved in El Salvador, the meaning behind the numbers is elusive at best.