July 21, 2013
On a recent day in El Salvador, the power of volcanoes and floods to devastate communities through the centuries was powerfully illustrated for me.

My morning was spent at Joya de Ceren, an archaeological site dating back to approximately 600 C.E., which is currently being excavated.    It is one of the top archaeological sites in El Salvador and is a  UNESCO World Heritage site.

From the UNESCO description:


The Joya de Ceren settlement was founded before the end of the 6th century. Since excavations are still in progress, it is not yet clear whether it was a small village or a larger community. Evidence from the structures excavated so far suggests that the inhabitants were farmers.

Not long afterwards, around AD 600, Joya de Ceren was destroyed by the eruption of the Loma caldera, less than 1 km from the settlement. Although the eruption only affected some 5 sq km, it completely buried Joya de Ceren under 5-7 m of volcanic ash.

The site was discovered during the construction of Government grain-storage silos in 1976, when a clay-built structure was exposed by a bulldozer. Excavations were carried out under the direction of Dr Paysan D Sheets (University of Colorado) in 1978 and 1980, but were interrupted by civil war. They were resumed in 1989 and been continuing since that time.

Our guide to the site explained that no human remains had been found at the site, leading archaeologists to conclude that the inhabitants had some advance warning of the volcanic explosion and had fled for their lives.  Like Pompeii in Italy, the blanket of volcanic ash which covered Joya de Ceren preserved a moment in time, providing significant information about the daily lives of the Mayan people in the region.  A museum on the site contains many of the household items uncovered in the houses and other structures which have been excavated. 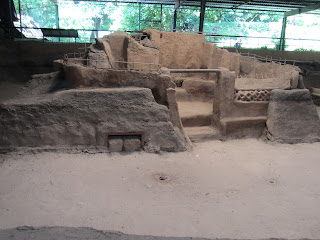 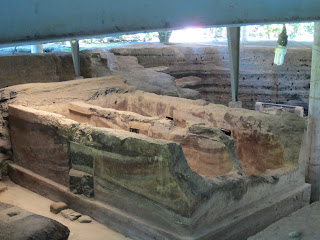 Later that day I visited the community of Las Graditas, in the municipality of Jayaque in the Balsam mountain range in southwestern El Salvador.    Las Graditas suffered catastrophic damage during Tropical Storm 12-E in 2011 when a wall of water and boulders swept down the mountain stream bed which runs through the community.

Like the inhabitants of Joya de Ceren, families living in Las Graditas had sufficient time and warning to evacuate their homes and community before the pending disaster.   Like the Mayans fleeing the volcano, they had to leave many of their household possessions.   Many houses were simply washed away.   Others were severely damaged by the torrent.

The church and the school were destroyed, never to be rebuilt.   Pictures I took that day: 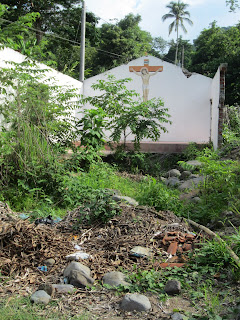 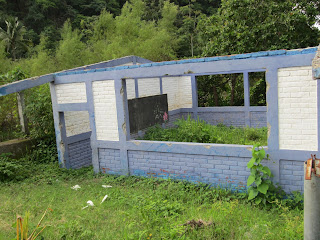 Many members of the Las Graditas community have returned to rebuild their lives.   They receive no help from the government which has determined this area is at too high a risk of future disasters.    The school will not reopen.    The Lutheran church in nearby Jayaque has a small project with children impacted by the disaster, but no other NGO is working with Las Graditas.   It's a sad situation.

As I reflected at the end of that day, I was struck by certain similarities in the disasters 1400 years apart.  Two small agricultural communities were destroyed by overwhelming forces of nature, with their residents fleeing just before the disasters.   The fear of the children leaving behind their toys and beds in Joya de Ceren was the same fear felt by the children I met in Las Graditas.   Will some future archeologists find the partial walls of the school and church in Las Graditas and wonder what event caused this destruction?

1400 years have passed, but El Salvador's vulnerability to natural disasters has not.


For detailed information about Joya de Ceren, including visitor information, visit this site.