July 24, 2013
There have been at least eight sets of public opinion poll results released since May 15 concerning the upcoming 2014 presidential election in El Salvador.   Starting today, I will try to keep a running tally of the polls so you can see where the race stands. 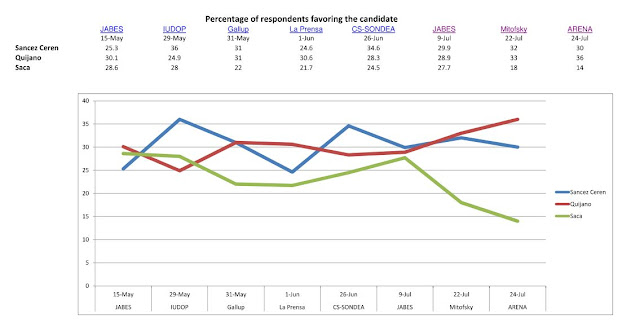 I have put all these results in a spreadsheet which anyone can download from this link and do their own analysis.   The spreadsheet also has live links to the sources where all these poll results were originally published.

Obviously not all polls are of equal quality or are free of bias.   For example, the last two polls, by the ARENA party and traditionally conservative Mitofsky, I would expect to have some bias against Saca, and they produce the lowest numbers for the former president.   In a future post, I will look at how the different polling organizations have fared in predicting previous elections.

So far the poll results still tend to show that the election will go to a second round, probably with Sánchez Cerén for the FMLN against one of the other two candidates.   Unless  Sánchez Cerén starts polling above 40%, I have a hard time seeing him winning in a second round, because the right wing votes will coalesce around whoever is their single candidate remaining.

Lawrence M. Ladutke said…
Why is the FMLN blue and ARENA red?
5:28 AM

Tim said…
I have now changed the colors on the linked spreadsheet.
8:44 AM

Hodad said…
the colors, jaaaa anyway It needs to be FMLN again, I am just disappointed with their choice of an older man, as with most all politicians they need to be retired if Deren has same and good advisers why not Funes still has what 72+ % aprovechado? but basically the politics there are evening out, still a few greedy holdouts and oldhard line FMLN, all need to lighten up and work together
which seems to be happening vs the USA being torn apart
12:08 PM