June 10, 2013
A outbreak of a fungal blight affecting coffee plants known as "coffee leaf rust" is threatening the livelihoods of tens of thousands of people in Central America including El Salvador.  An article from the Christian Science Monitor describes the problem:


[T]his time is different, experts say. The aggressive outbreak has extended to more than 70 percent of coffee bushes in Guatemala and El Salvador, 64 percent in Costa Rica, and lesser amounts in Nicaragua and Honduras, according to a May 13 report by the International Coffee Organization. Regional coffee production fell 17.1 percent in the past October-to-March season, and it is likely to fall 30 percent to 40 percent in the coming season, which begins in October.

In Central America, with a total population of 41 million, nearly 1 million seasonal and permanent coffee workers are expected to lose their jobs next season.

“Each of these jobs are providing for six people. You do the math,” said Maja Wallengren, an independent coffee analyst based in Mexico City who predicts that the disruption to families will be far greater than just the economic costs. “It’s not something you can get under control in a year.”

Other agricultural sectors, such as sugar and palm oil, cannot pick up the slack from unemployed coffee workers, and since devastated coffee farms are often clustered together, pockets of unemployment soar.

“You’re going to see a lot of migration,” said Alejandro Keller, who is the fourth generation of his family to grow coffee at the Finca Santa Isabel, a large organic farm an hour’s drive from Guatemala City.

This photo essay on Flickr shows the devastation of the rust on a coffee finca in El Salvador.

The International Coffee Organization has issued a strongly worded report about the severity of the problem.   Among its findings:


Table 1 contains a summary of the effect of coffee leaf rust for crop year 2012/13,
according to figures from PROMECAFÉ. Total damage in the region is estimated at
2.7 million bags, costing the region around US$500 million. It is expected that the impact
will be even more severe in the next crop year 2013/14. On average, over 50% of the total
coffee growing area in Central America has been affected by the pest. The incidence rates
are as follows: El Salvador 74%, Guatemala 70%, Costa Rica 64%, Nicaragua 37% and
Honduras 25%. 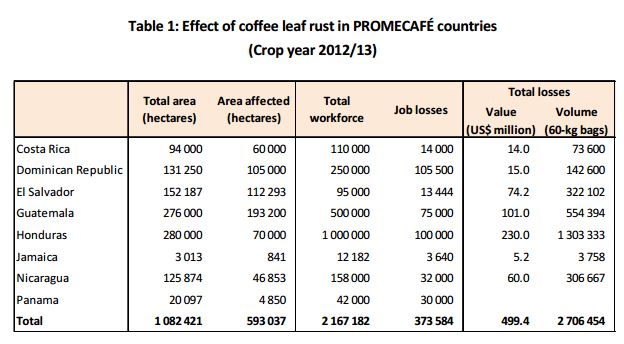 In addition to economic losses,there has also been a significant social impact to take
into account. Most coffee in Central America is grown by smallholder farmers, who will find it difficult to absorb the expected losses. It is estimated that some 374,000 jobs will be lost in 2012/13 due to the rust, as the labour used to harvest the crop will not be needed. In addition, the loss of income of farmers could lead to issues regarding food security in many areas. Increased migratory pressure towards North America is also to be expected.


The report goes on to note that losses will be higher in the next harvest season beginning in November/December 2013.   You can also learn more about this problem from World Coffee Research.

This blight of coffee rust appears, according to many scientists, to have its roots in global climate change.   Modified weather patterns have provided conditions where the fungus can flourish where before it was controlled.   More on this aspect of the problem appears in the blog entry from the New York Times.