April 02, 2013
It's been awhile since I have reviewed any books on the blog. I have a couple to recommend for you.

The first is the recently published Perquin Musings, subtitled, A gringo's journey in El Salvador.   Perquin Musings is the memoir of Ron Brenneman who came to Central America in the early 1980s as a volunteer in camps in Honduras where refugees from El Salvador's civil war were sheltered. Brenneman never went back.    He takes us from his work in the camps, to accompanying civilian refugees back into the country, to providing support to civilians and guerrillas during the war, to twenty years of post-war rebuilding.

Throughout the memoir, Brenneman muses about his own motivations and larger meanings.   Take for example, this scene on the streets of San Salvador during the war:


Zipping through the Colonia Roma while heading to
the University of Central America (UCA), I came around
the curve and found the Devil Himself lined up right
between the headlights of my Toyota Landcrusier.

I  was  driving  at  about  forty-five  miles  an  hour.
Roberto  D’Abuisson,  the  leader  of  the  violent  hard
right and the architect of the infamous Salvadoran death  squads,
stood  all  alone  in  the  middle  of  the
street about sixty feet away.

And time slowed down, way down and almost ground to
a halt.

I had all the time in the world to make the right decision.

I knew instantly that I could get away with it. I knew
where  to  ditch  the  Jeep  and  how  to  be  out  of  the
country within four hours.

This man was personally responsible for the pain and
suffering of people I had grown to love. He was the icon
of everything on the wrong side of the war, the essence
of evil itself.

My personal convictions, hard to separate from my up-
bringing, clashed with the ideal of laying down my life
for my brother. Make the ultimate sacrifice and go to
hell for it. What greater sacrifice than losing your soul
to do a good deed?

Will this help the cause? Will this stop the war? Why
do I have this decision laid on my shoulders?


Perquin Musings is a quick read and will be particularly interesting for other gringos who have fallen in love with El Salvador.

Today Brenneman owns and operates the equally recommended Hotel Perkin Lenca the town of Perquin in northern Morazan Department.   Proceeds from the sale of the book go to the Perkin Educational Opportunities Foundation to support the Amún Shéa school in northern Morazan which Brenneman founded.

Perquin Musings is available at Amazon. 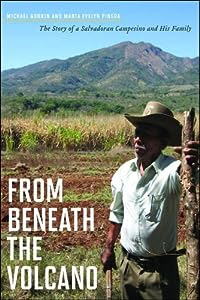 My second recommendation is From Beneath the Volcano, subtitled The Story of a Salvadoran Campesino and His Family, by the husband-wife team Michael Gorkin and Marta Evelyn Pineda. (2011 University of Arizona Press).

The volcano in the title is the Guazapa volcano to the northeast of San Salvador in the center of the country.  The Salvadoran campesino is Luis, who lives in a community in Guazapa's shadow.   The book consists of a collection of oral histories of Luis and his extended family and neighbors recounting their lives during and after the civil war.   Through these interwoven stories told in the voices of the actors themselves, we get a picture of rural life in El Salvador as lived in the midst of conflict and in the subsequent challenges of the post-war period.

Beneath the Volcano is a follow on to the authors' previous book From Grandmother to Granddaughter, Salvadoran Women's Stories, which has long been a book I regularly recommend to friends wanting to get an introduction to the lives of  ordinary Salvadorans from all segments of society.