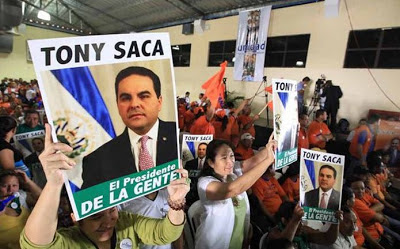 Former Salvadoran president Tony Saca today officially launched his campaign to be re-elected as president in the 2014 elections.   Saying that El Salvador does not have the luxury to have a new president who will learn on the job, the conservative politician seeks to return to the country's top job.

He will stand as the presidential candidate for a "unity movement  of three small right wing parties:  GANA, PDC and PCN.    In announcing his candidacy, Saca stated  that if he Salvadorans make him the president again, he planned to "govern with the Bible and the Constitution as guides" and to use his experience to bring solutions to the problems plaguing Salvadorans.

After he finished his 5 year term as president in 2009, Saca was expelled from ARENA as a traitor, when he was seen to be behind the departure of several legislators to form the GANA party.

Although there's a year to go, Tony Saca joins Salvador Sanchez Ceren  for the FMLN and Norman Quijano for ARENA in what is already a full scale presidential campaign.