January 15, 2013
Oscar Luna, El Salvador's Human Rights Ombudsman (PDDH), is warning that a gold mine in Guatemala, close to the border with El Salvador, threatens violations of human rights to water, health, and the environment.   Luna issued a report on October 10, urging president Mauricio Funes to use the executive branch of the government to protect the country's natural and hydrologic resources from the impact of the mine.

The mine in question is the Cerro Blanco mine, being developed by the Canadian gold mining company Gold Corp.   The mine is located in southeastern Guatemala near Lake Guija. 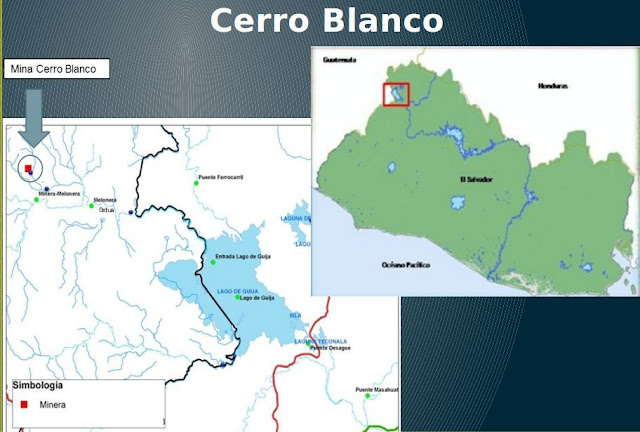 The lake's waters flow into the Lempa River, El Salvador's most important river, which supplies  people throughout the country.

Opposition in El Salvador to the Cerro Blanco mine has been led by the environmental organization CEICOM.   In 2010, David Pereira of CEICOM asserted:


"Toxic waste water from the mine will be discharged into the Ostúa river in Guatemala, and will flow into the 45 square kilometres of Lake Güija, and on into the Lempa river, the main river basin in El Salvador," David Pereira, a Salvadoran activist with the non-governmental Research Centre on Investment and Trade (CEICOM), told IPS.


However, Goldcorp’s subsidiary in Guatemala, Entre Mares, said in a written statement that “as part of sustainable mining, Cerro Blanco’s operations are transparent, responsible and mindful of the environment. Additionally, the project is subject to national laws and international parameters.”

The company also said that in its own auditable environmental assessment of the project, it would apply the highest national and international mining requirements and standards.

Oscar Luna, the Human RightsOmbudsman, is also seeking to have the InterAmerican Commission on Human Rights get involved in the matter.   He hopes to get the IACHR to hold a hearing on the threat to human rights posed by mining operations at Cerro Blanco as soon as March.
Environment Human Rights Mining PDDH Water