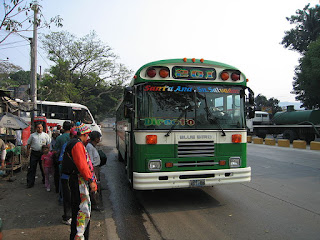 In the greater San Salvador area, the bus system is going to switch from taking fares in cash to the use of pre-paid fare cards.    According to La Prensa Grafica, some 33 routes in the Santa Tecla area will make the change to the cards in January.  The government states that the remainder of the routes will convert over within the next 10 months.    Fare cards will be available at some 300 distribution points throughout the greater San Salvador area.

This seems like a positive step forward towards crime reduction on the bus routes.   No longer will the buses be carrying fare boxes loaded with any cash.   While fare cards will not eliminate robberies of passengers on buses and bus owners will still be threatened with extortion, it is a sensible measure as long as the cards are readily available to all who depend on the buses for their means of transportation.