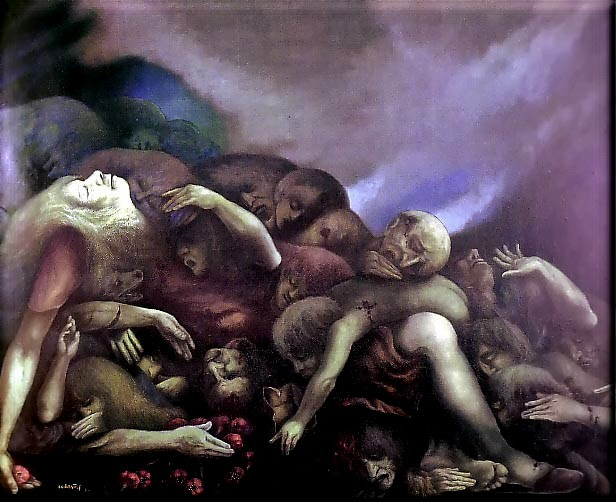 Salvadoran painter Carlos Cañas is the winner of the 2012 National Cultural Prize in El Salvador.

During the seventies and eighties, this Marxist painter put his art to the service of social criticism.   His famous work "Sumpul", shown above, provides a chilling representation of the 1980 massacre at the Sumpul River in Chalatenango.   Today the painting can be found hanging in the MARTE Museum in San Salvador.

The Associated Press interviewed Cañas in 1984 as he worked on Sumpul, where he described his style as "magical realism."   Cañas stated "I do as [writer Gabriel] Garcia Marquez does, using magic to tell the truth.  I document things and events though my painting."

You can see more of his works at this link.
Art

Carlos X. said…
Good! I have always admired "Sumpul." It is sort of the Salvadoran "Guernica." I wonder why the Salvadoran war did not produce a more blatant outpouring of art. Cañas' painting almost singly stands out as the creative outcry against the destructive effort to silence all voices of discord. It seems that during the war, most established Salvadoran artists either ignore the topic, or address it through indirect, oblique references. Cañas takes the subject matter head on, yet he avoids presenting us a cliché, like overtly political art in Latin America can be. The grotesque composition of "Sumpul" lingers on both the brutality of the massacre as well as the humanity of the victims, and it points us, like good art always does, back to ourselves--as opposed to some external, political referent.
2:35 PM