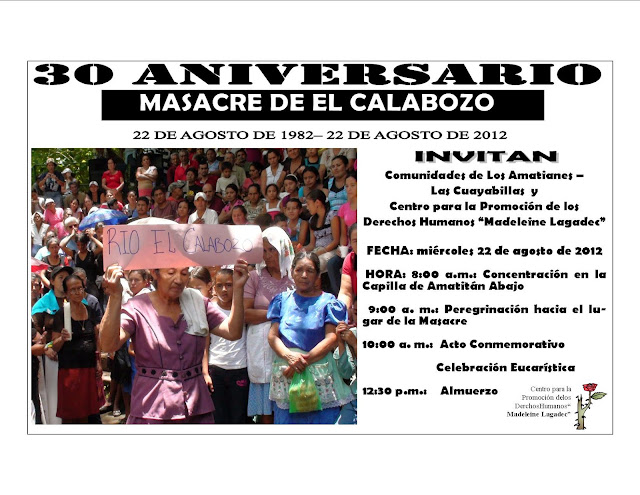 On Wednesday August 22,  people will gather at the church in Amatitán Abajo, in San Vicente Department, to commemorate, remember and demand justice for a massacre which happened thirty years ago.   It is the anniversary of the El Calabozo massacre, when troops of the US-trained Atlacatl Battalion murdered more than 200 civiliam victims taking refuge along a river's banks.

The massacre was documented in the UN Truth Commission Report following the signing of the 1992 Peace Accords:


On 22 August 1982, in the place known as El Calabozo situated beside the Amatitán river in the north of the Department of San Vicente, troops of the Atlacatl Rapid Deployment Infantry Battalion (BIRI) killed over 200 men, women and children whom they were holding prisoner.

The victims had converged on El Calabozo from various directions, fleeing a vast antiguerrilla military operation which had begun three days earlier in the area of Los Cerros de San Pedro and which involved, in addition to the Atlacatl BIRI, other infantry, artillery and aerial support units.

There was a major guerrilla presence, supported by the local population, in the area of the operation. Government forces had penetrated the area on earlier occasions, but the guerrillas had avoided combat. This time the operation, which bore the name "Teniente Coronel Mario Azenón Palma", involved some 6,000 troops and was designed to clear the area of guerrillas. As the troops advanced, the civilian population fled, fearing the shelling and the soldiers' violence. One of the places where a large number of fugitives congregated was El Calabozo.

According to witnesses, the fugitives were surprised by the Atlacatl Battalion unit. Some of them managed to escape; the rest were rounded up and machine-gunned.  The military operation continued for several more days. The Government informed the public that it had been a success: many guerrillas had been killed, camps had been destroyed and weapons and other supplies had been seized.

On 8 September, two weeks after the incident, the massacre was reported in The Washington Post. The Minister of Defence, General José Guillermo García, said that an investigation had been made and that no massacre had occurred. He repeated this assertion in an interview with the Commission....

There is sufficient evidence that on 22 August 1982, troops of the Atlacatl Battalion deliberately killed over 200 civilians - men, women and children - who had been taken prisoner without offering any resistance. The incident occurred at the place known as El Calabozo, near the canton of Amatitán Abajo, Department of San Vicente.

Although the massacre was reported publicly, the Salvadorian authorities denied it. Despite their claim to have made an investigation, there is absolutely no evidence that such an investigation took place.

Families of the victims of the massacre have worked to keep the memory of these events alive and to demand justice.   Laura Hershberger wrote on the SHARE Foundation blog about a youth event in 2009 commemorating the slaughter:


None of the youth had lived through the Calabozo massacre that happened by river of Amititan in a place called the Calabazo in 1982, but they had grown up hearing the story from their family. How the army had advanced from the San Pedro hills and how the inhabitants of the region fled their homes in what was known as the “guindas.” How the people had been walking for seven days without food and took refuge by the river to sleep when they were attacked by the Atlacatl and the Ramon Belloso Batallian, it was then that they were massacred in cold blood, over two hundred men, women and children. When the youth group from the Community of El Rincon acted out a play that had written about the massacre, they made sure to include the part where the mothers plea for the soldiers to take their own lives but to spare the lives of their small children.

Those pleas for mercy fell on the deaf ears of the soldier of the Atlacatl Battalion who 9 months earlier had slaughtered 1000 civilians in El Mozote.   The forensic anthropologists from Argentina who have conducted the investigations at El Mozote have also exhumed bodies of victims of the El Calabozo massacre.   Earlier this year, the online periodical ContraPunto described their recovery of the body of a grandmother and her two granddaughters, ages 5 and 9, from the massacre site.   This investigation had been led by  Asociación Pro Búsqueda, the NGO which continues the search for children missing from the years of the civil war.   As ContraPunto notes, twenty years after the signing of the Peace Accords, many families still face the uncertainty of not knowing where the bodies of their loved ones can be found, or whether they could have survived.

The families of the victims continue to demand justice in the face of the 1993 Amnesty Law which the government interprets to prevent prosecution of such war crimes.   There is still no political will in the National Assembly or the president's office to repeal the law.  You can watch this video of a 2009 press conference given by human rights lawyer David Morales and families of victims regarding their petition that the case against those responsible for the the El Calabozo massacre be pursued.

Amnesty International has taken up the cause of the victims and is promoting a petition drive to seek to get the Funes government to actively pursue an investigation and bring the perpetrators of the massacre to justice.   The petition also asks that the Salvadoran government publicly apologize and take responsibility for this human rights atrocity and provide reparations to the victims.

LauraElizabeth129 said…
Great post Tim! I'm glad to see that the Calabozo massacre commemoration got a lot of attention. Would you share this link with anyone who might be interested? We are selling Salvadoran themed greeting cards to support a scholarship program in those communities where the massacre happened. Thanks! http://www.etsy.com/shop/Tarjetitas
9:10 PM