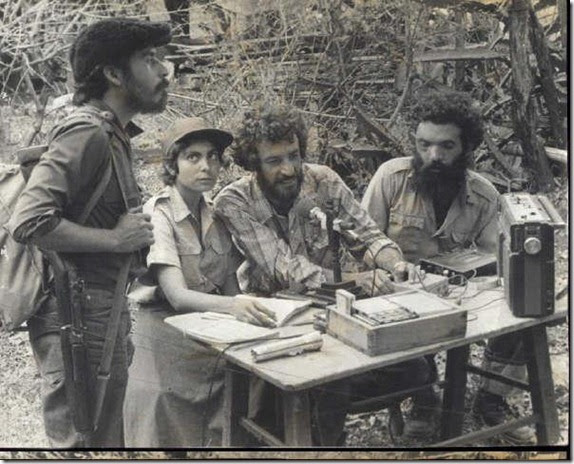 One of the fascinating stories which came out of El Salvador's 12 year civil war is the story of Radio Venceremos, the rebel radio station of the FMLN guerillas.    I just finished reading Broadcasting the Civil War in El Salvador: A Memoir of Guerrilla Radio, the memoir of Carlos Henriquez Consalvi.   Known by his nom de guerre, Santiago, Consalvi was one of the leaders of Radio Venceremos and one of its on-air voices reporting the news of the war from the guerrilla perspective.

Broadcasting the Civil War offers an intimate view of the operation of the guerrilla's radio operation.   From the initial set-up of the station, through numerous evacuations one step ahead of the army, Santiago's account  details daily life in the FMLN guerrilla camps in the eastern part of the country during the 1980's.

Working with Santiago, Mariposa was one of the female voices of the rebel's radio station.   She recently wrote a short history of Radio Venceremos on the Hunnapuh blog..   With several archival pictures like the one above, Mariposa, provides another insider's view of this radio station which constantly outwitted the Salvadoran government armed forces.   Because of Radio Venceremos, Salvadorans throughout the country could listen to an alternate viewpoint of the war which countered the government and right wing dominated media in the country.