April 22, 2012
The next presidential election in El Salvador will not be until 2014, but as soon as last month's municipal and legislative elections ended, people began talking about possible candidates to replace Mauricio Funes.   Here are some of the leading contenders.

Norman Quijano.   The mayor of San Salvador from the ARENA party won a second term by a landslide.   As mayor of the country's largest city, he has already shown the ability to gather significant support and is probably viewed as someone able to get things done.

Ana Vilma de Escobar.   She was the vice president of El Salvador from ARENA during the administration of Tony Saca.   She sought that party's nomination in 2009 and is likely to do so again in 2014.   In the recent legislative elections, she campaigned vigorously to be elected as an ARENA deputy and had more votes than any other candidate for the National Assembly. 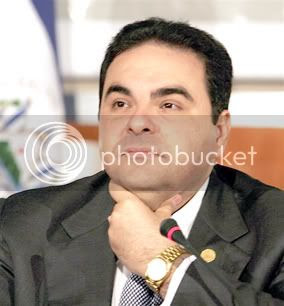 Tony Saca.   President of El Salvador from 2004-2009, Tony Saca is rumored to be interested in returning to the presidency.   The ARENA party elected him, but now they call him a traitor because of his connections to the breakaway GANA party.   He is now the leading figure to be a presidential candidate for GANA.    (A president in El Salvador may not be re-elected to successive terms, but can be re-elected when there is a gap in time between the presidential terms).

Salvador Sanchez Ceren.  The current vice-president of El Salvador and former guerrilla commander is one of the traditional hard-left leaders of the FMLN.   According to ContraPunto, the FMLN leadership is lining up to choose Sanchez Ceren as its candidate for 2014.  The party leadership is unhappy with Mauricio Funes who they believe has not been true to the party agenda.   In the same ContraPunto article,  Mauricio Funes is quoted expressing skepticism about Sanchez Ceren as a candidate rather than a moderate leftist like Funes.

The FMLN, as well as the other parties, might do well to look at the example of Funes.   His popularity remains high, as shown by a recent Mitofsky poll giving Funes a 65% approval rating - the highest in Central America.

Carlos X. said…
Mayor of fourth largest city Santa Tecla, Óscar Ortiz, is also being promoted by Salvadorans abroad, and by moderate forces in the FMLN, as that party's best option to challenge Quijano, if he is the nominee, as Ortiz has the reputation for competence and is broadly popular, having been reelected in 2003, 2006, 2009 and in 2012.
10:31 PM

Cort Greene said…
Whats needed is a real socialist and a socialist program based on taking over the levers of economic power such as the banks and large land holdings and large companies during this worldwide economic crisis.
6:19 AM