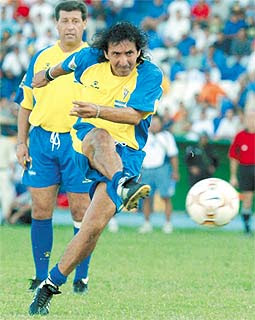 Tuesday El Salvador's greatest football (soccer) player turned 54.    Jorge "El Mágico" Gonzalez thrilled football fans around the world with his fantastic skills during the 1980s.   The sports section in the Salvadoran newspaper La Prensa Grafica on Monday devoted to  El Mágico was almost as large as the election news coverage.

Here is some background from Game Intelligence:


Born into a modest family, Jorge Alberto González Barillas grew up playing football with his brothers on the streets of San Salvador, El Salvador’s historic capital. Although his prodigious talent meant that he was quickly picked up by a professional club, González never lost his fun-loving approach to the sport, and he refused to see it as anything other than a game. “I do not like to view football as a job,” he later explained, “If I did then I would not be me. I only play to have fun.”

He clearly had a lot of fun in his early professional years, winning three league titles in five years for Salvadoran giants C.D. FAS, as well as their only ever CONCACAF Champions League. His mercurial skill and ability to produce the unexpected earned him the nickname “El Mago” (the magician) amongst his adoring following, who saw him as one of their own. Despite his celebrity, González always remained humble and would often be found having a kickabout with local children in the park or drinking beer with friends from his old barrio.....

Whilst in Spain González’s nickname was transformed from El Mago to simply Mágico. For the Spanish audiences González was not a magician; he was magic. Rather than perform wizardry, he embodied it; a hex on opposition defenders who were often unable to find any counterspell. His skill seemed to come from nowhere, as if uncontrolled even by him. As the Salvadoran author Geovani Galeas would later describe:

“He is a phenomenon, a genetic mutation… I believe that he is a monster of nature; he is not accountable for his talent. Therefore, he is timid… he understands that he is not responsible for his genius.”

At home he is held in equally high regard, having received the Hijo Meritísimo, El Salvador’s highest honour, in 2003. His name was immortalised in 2006 when the country’s national stadium, the Estadio Flor Blanca, was renamed the Estadio Nacional Jorge “Mágico” González, although he was not entirely comfortable with such a tribute. “Every one of us Salvadorans who are trying to do things well, or at least not hinder progress, are worthy of this award. That said, I am flattered,” he responded with typical humility.