Did the government make a deal with the gangs? 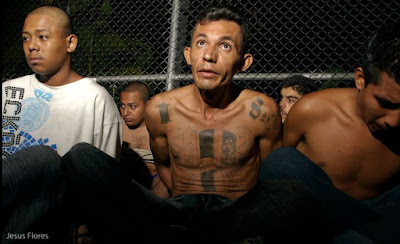 In the past week, there has been a 53% decrease in the level of homicides in El Salvador from the weekly average in the first 9 weeks of 2012.   The online periodical El Faro published a report on Wednesday suggesting that this decrease was the result of a deal struck between the Salvadoran government and gang leaders.

According to El Faro,  30 leaders of the Mara Salvatrucha and Barrio 18 gangs were transferred during the week of March 4 from the country's maximum security prison to lower security prisons where they can receive visits from relatives and have physical contact with visitors.   This transfer was said to be part of a deal in which the transfers were made in return for the gangs reducing the number of murders.   The El Faro report quoted a local leader of a Mara Salvatrucha cell who told of receiving a call from leaders in prison telling him the maras were now "on vacation:"


“El Muchacho” received a call on his cell phone on Friday morning. The call came from the prison in Ciudad Barrios and the voice on the telephone explained the new policies of the MS-13: jailed leaders had decided that the gang needed to “calm down,” which in the group’s slang is the same as saying that killings and new extortion attempts would be prohibited until further notice.

El Muchacho is an individual with whom we had scheduled an interview in a San Salvador shopping mall. He is a boss, or “palabrero,” of a local MS-13 “clica” (band). Orders that come from prison are non-negotiable, so he called up his crew and relayed the message. “We’re on vacation,” he joked.

The clica led by this 30-something had to suspend some plans immediately. According to El Muchacho, the orders caused them to put off two hits they had planned for that very same day. The only reason the gangster obeys orders like this is his utter fear of the Mara Salvatrucha’s punishment system. If a subordinate disobeys, he will be punished with anything from a severe beating to death. If El Muchaho defied his orders, both he and his boss in the Ciudad Barrios prison would be punished.

Initially, the government did not respond to the El Faro report. Minister of Public Security David Munguía Payés has now denied that there were any negotiations with the gangs. He is saying that the somewhat unprecedented movement of gang leaders from maximum security was for a mixture of reasons. Among the reasons he has pointed to are humanitarian reasons for prisoners in poor health, legal reasons for prisoners who had fulfilled a certain percentage of their sentences, and security reasons to thwart a planned massive escape attempt.

El Faro is sticking by its story.

In the past, the government has claimed that as many as 90% of the homicides in the country are linked to the gangs.   If orders from gang leaders in prison could create an almost immediate drop of more than 50% in the murder rate, it adds credibility to the position that the homicide problem is primarily a gang problem and that the gangs have a well-defined structure for the command and control of individual cells in El Salvador's neighborhoods.

There will certainly be more to this story in future days.

Lawrence M. Ladutke said…
Mungia Payes claims they were transferred to a LESS SECURE facility to PREVENT A BREAKOUT????

This makes about as much sense as not using a condom in order to reduce the risk of AIDS.
6:39 AM