Record number of murders - but why? 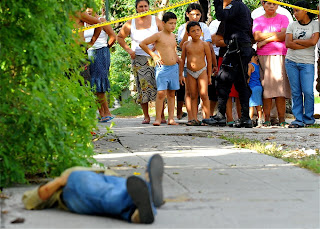 The close of 2011 in El Salvador is dominated by a single statistic.   There were more murders this year than in any other year since the signing of the 1992 peace accords.  According to police statistics, through Christmas Day there has been 4308 homicides in El Salvador, topping the prior post-war high of 4233 in 2009.   The murder tally in 2011 represented a 9.3% increase over the year before. It leaves El Salvador with one of the highest murder rates in the world, 65 per 100,000 inhabitants, perhaps surpassed only by its neighbor Honduras. Mike at Central America Politics blog has a detailed look at the murder rate over the past several years.

As reported in El Faro, the National Police (PNC) are blaming part of the increase on the growing influence of drug-trafficking in the country, including the sale of drugs locally on the streets.

The biggest dispute, however, about these statistics is the role of gangs. New Minister of Security David Munguía Payés asserts that 90% of the murders are gang-related. In contrast, the sub-director for investigations at the PNC, Howard Cotto, asserts that only 30% of the murders are gang-related. The former general Munguía Payés claims that he has a better crime database than is used by the PNC. Cotto says there are 28,130 gang members in the country, but Munguía Payés says his statistics show there are more young men in those gangs.

When asked about the source of murders in the country, El Salvador's attorney general, Romeo Benjamín Barahona Meléndez, refused to pin specific percentages to any one cause. Barahona also mentioned that some crime was committed by criminal groups who were simply robbers and thieves, but not part of the organized maras.

Of course, you have to question anybody who says they know the proportion of murders committed by gangs or drug-traffickers when the PNC says it has been able to solve only 34% of the murders in the country.

The answer to the question of what causes the epidemic of murder in El Salvador drives the new Minister of Security's planned security policy. Munguía Payés has pledged to reduce the level of murders by 30% during the course of 2012.   Because he believes the vast majority of murders are committed by the gangs, he is focused on a strategy which involves taking the battle to gang-controlled areas and using superior armaments and force to diminsh the gang threat.  He recently swore in 318 members of a new anti-gang unit in the PNC, and spoke in an interview about the need to increase the firepower available to the police.