Throughout the year, our friend and blogger Polycarpio writes about all things related to slain Archbishop Oscar Romero on the Super Martyrio blog. As in previous years, here is his recap of the: 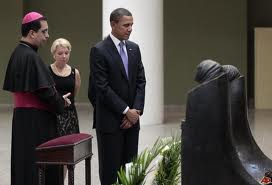 These were the stories that kept Archbishop Romero in the headlines in 2011, thirty one years after his assassination. Even though there was no news on the canonization front, 2011 was a strong Romero year.

The L.A. Times called Obama’s tribute to Romero, “arguably ... the most dramatic gesture of his swing through Brazil, Chile and El Salvador.” The clamor and clangor of a presidential visit (Obama’s motorcade was said to consist of over thirty cars) led to silence and solemnity as Obama, accompanied by Salvadoran President Mauricio Funes, and Archbishop José Escobar, lit a candle in the Cathedral crypt. Activists fumed that Obama didn’t speak, but the symbolism said it all.

Four hundred slides of and by Óscar Romero revealed the human side of a man known primarily for his clerical career. Apart from showing competence as a photographer, the pictures reveal Romero’s life-long concern for the poor, whom he presents with “a very special sensibility ... that not every priest is going to have.”

Over six hundred articles and commentaries by Archbishop Romero, written throughout his priestly and episcopal career, were published for the first time on the Internet on the canonization office web site. Like his photographs, Romero’s writings offer a glimpse into his evolving “preferential option for the poor” before he was Archbishop of San Salvador.

National Guard Deputy Sargeant Marino Samayoa Acosta was the bearded man who pulled the trigger on March 24, 1980, killing the Archbishop of San Salvador, according to Diario CoLatino. The Salvadoran government announced that it “does not rule out” conducting an investigation.

“El cielo abierto” ["The Open Sky"], directed by Mexican filmmaker Everardo Gonzalez, was the latest attempt to tell the Romero story anew. Daily Variety opined that, “this is a solid, moving treatment of a major late-20th century figure, and should see fest[ival] play followed by docu[mentary] channel rotation.” (Read more.)

In the cat and mouse moves between a Spanish court investigating the 1989 Jesuit massacre and the Salvadoran military officers accused of having perpetrated it, you might have missed the Court’s findingthat the Romero's assassins acted out of fear Romero, as a peace maker, was an affront to their military careers.

Wikileaks revealed that the Salvadoran government had considered supporting the Romero beatification to get the Church to stand down on demanding an investigation of the crime. The leaked Sep. 2007 cable reported that “The [Government of El Salvador] is considering an approach to the Vatican to seek the Holy See’s support for dropping the case from the [Inter-American Commission on Human Rights] without derailing Romero’s beatification.”

After visiting El Salvador in Nov. 2010, Cardinal Peter Turkson of Ghana professed “a growing appreciation” of Archbishop Romero. He delivered the Romero Lecture at Notre Dame University in March. “My home country of Ghana was also beset by various types of conflict,” observed the cardinal. “Drawing near to Archbishop Romero … I feel encouraged in my role as as President of the Pontifical Council for Justice and Peace and a close-co-worker of the Holy Father.”

El Faro’s story last year had tracked down Cpt. Álvaro Saravia, thought to have organized the Romero assassination, in an unknown country, where now he lives in squalor not unlike that of the victims whom Archbishop Romero defended. “The worst misfortune in the world! Poverty!,” Saravia admited: “How could a man not be a guerrilla if he saw his children dying of hunger?”
Oscar Romero