Update on damage from rains 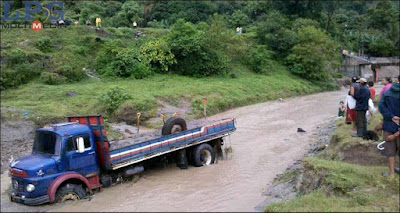 The rains which started on October 10 have not yet ceased.  President Mauricio Funes has declared a state of emergency (video) throughout the country due to the rains' impact.  The saturated soil can hold no more of the rain which falls, producing floods and mudslides in at-risk areas.   The death toll has climbed to six.    La Prensa Grafica reported today that 15,000 families have been affected in some way by the rains, 6548 persons are currently in 92 shelters across the country.  Rivers have overflowed their banks in 47 locations, and there have been 384 mudslides.  Schools remain closed.

The rains in El Salvador are part of a tropical depression bringing tragedy across Central America as the Boston Globe reports:


Heavy rains generated by a low-pressure system hammered Central America for a third day Friday, putting officials on alert in countries where mudslides and swollen rivers have already killed 36 people. At least 21 people have been killed in Guatemala and thousands of others were evacuated or saw their homes destroyed by the incessant downpours.

In El Salvador, rivers have overflowed their banks, destroying villages and prompting an evacuation of about 4,000 people from their homes, the country's disaster management office said in a statement Friday.

In Honduras, six people have been killed in floods and the roads connecting the nation to Guatemala have been destroyed. Other communities have been left isolated by the floods. In Nicaragua, four people have died this week. The system is expected to hover over the region for the next couple of days, generating more rainfall, said the U.S. National Hurricane Center in Miami, Florida.

Very worrying is a front page story in El Diario de Hoy quoting experts' views that as much as 40% of the country's harvests of the basic grains -- rice, corn and beans -- could be lost.   Such crop losses would increase rural poverty and prevent any easing of already high food prices.

English language bloggers in El Salvador are writing about this weather emergency.  Voices from El Salvador has been providing regular updates on the blog and on Facebook on the impacts for the communities of the lower Lempa River region near the coast where flooding is a problem.   Those communities are threatened as the government releases water from the dams up river to relieve pressure on the dams.

Blogger Alisha writes about what it's like living in the ongoing rains.   Jen notes the alerts throughout the country and the widespread reports of damage, while the Crispaz blog has government estimates of needed relief funds.  Kathy notes that there is a real need for prayer when "there are three really big things to worry about: landslides, flash floods and rivers over-flowing their banks."

And three motorcyclists on their way to from north to south through the Americas, posted a video blog of the rain they found in El Salvador.

This might be a good time to make an extra contribution to your favorite NGO working in El Salvador.

This week of rain is a good example of why El Salvador, along with other countries in Central America, are in the top 10 for countries most exposed to natural disasters according to the UN's WorldRiskReport 2011.

You can follow updates (mostly in Spanish) on Twitter with the #lluviasv  tag.  There is a photo album here with a collection of images of the flooding from the Salvadoran media.