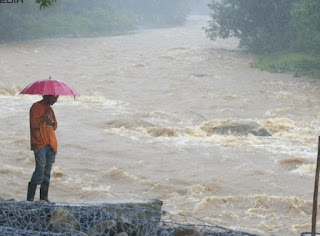 Heavy rains, caused by a tropical depression off the Pacific coast have caused flooding and landslides in various parts of El Salvador.   School has been suspended in 8 of the country's 14 departments.    The weather system has left 18 people dead across Central America, including two women in El Salvador who died in separate landslides.

Certain towns in the department of Ahuachapan in the west are under a red alert for flooding, while much of the coastal region is under an orange alert and much of the rest of the country under a yellow alert.  The rains could continue for another 36 hours.

According to La Prensa Grafica, as of 10 a.m. this morning, there are approximately 1800 displaced people in shelters, 10 rivers have overflowed their banks, and there were 26 reported landslides.

You can see current weather radar images from El Salvador's national weather agency here.   La Prensa has a map with rainfall totals here and a gallery of images from the flooding here.
Deluge of 2011 Natural disasters