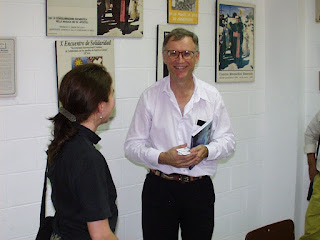 TSMontgomery said…
I am among the lucky ones who counted Dean a friend. We met shortly after he arrived in El Salvador as one of the replacements for the six Jesuits who were murdered by the army in November 1989. Many volunteered to come to the UCA in the wake of that atrocity; Dean was among the chosen. Especially in the early 1990s, during the transition from war to peace, we had many coversations both on and off campus. His political sense was as acute as his theological clarity; he was always one of the first people I called during visits to El Salvador and he was unfailingly generous with his time and insights. I can add little to the Marquette University citation, except to say that he will be sorely missed. Pacem en Paz.
5:43 PM