As of Monday night, October 17, the rains had not ceased in El Salvador (although things are a little better in the east of the country). The rainfall measured in some locations exceeded an extraordinary 1.2 meters over the past week, surpassing the rainfall total of Hurricane Mitch in 1998.

Here are the latest statistics for El Salvador:

See a collection of images of the floods here.

Schools continue to be suspended in much of the country until further notice.  A number of schools have been damaged by the flooding.

El Salvador's National Assembly passed a resolution for three days of national mourning and a 60 day disaster declaration. During those 60 days, international aid goods and supplies can come into the country duty free.

The following infographic from La Prensa shows the rainfall accumulations from October 10 through Sunday, October 16: 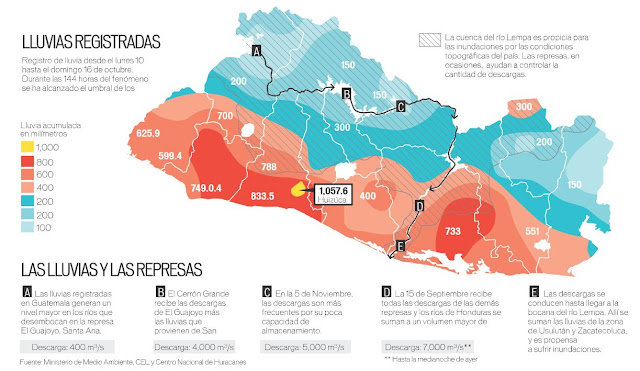 The English language press has only barely started to cover this story.


SAN SALVADOR — Civil defense officials across Central America were on high alert as the heavy rain that has pounded the region for more than a week showed no sign of abating. More than 80 people have been killed over the past week in mudslides and flooding across the mountainous region, home to 42 million people.

Rain-swollen rivers have destroyed bridges and damaged highways, while flooding has destroyed crops and damaged thousands of homes. The toll is expected to rise as reports from isolated villages begin to trickle in -- and in the coming days officials fear more mudslides from rain-saturated soil, food shortages in faraway towns, and health problems due to water-borne diseases.

Those killed include 32 in El Salvador, 29 in Guatemala, 13 in Honduras and eight in Nicaragua, according to local officials.

Hard-hit El Salvador on Monday launched a worldwide appeal for humanitarian assistance due to the intense rain. Aid has already begun pouring in from Taiwan, Spain, the United States, Venezuela and a host of other countries, Foreign Minister Hugo Martinez told a press conference, adding Taipei had donated some $300,000 in flood relief.

Alarm bells were ringing over a pending malnutrition crisis throughout the poverty-stricken region after heavy rains washed away crops in areas where thousands of families rely on small-scale farming for their nutrition needs.

Officials blamed the effects of global warming for the spate of deadly rains and flooding. "Climate change is not something that is coming in the future, we are already suffering its effects," said Raul Artiga with the Central American Commission on Environment and Development (CCAD).

In El Salvador, at least 10 bridges have collapsed and another 10 show serious damage, while 14 highways have serious damage, according to a preliminary report. Public Works Minister Gerson Martinez estimated the damages at "several million dollars."

El Salvador has experienced record rainfall of 1.2 meters (four feet) in one week, shattering the record set by Hurricane Mitch in 1998.


El Salvador's President Mauricio Funes said the country was "really being put to the test". "The situation has got even worse, it's still raining heavily in various parts of the country," Mr Funes, said in an address to the nation, late on Sunday. He said more than 20,000 people had been evacuated and entire communities had been cut off due to impassable roads.

The government launched an appeal for international humanitarian aid, with the rains forecast to continue through Monday. Spain has responded by sending 20 tonnes of supplies, including tents and hygiene kits.

La Prensa has created an interactive Google map which identifies the locations of landslides, blocked roads and fatalities.

You can help.   A number of organizations are making fund-raising appeals for disaster response.  Some of them include:


Please note that there are many more El Salvador-based organizations actively providing relief and soliciting funds as well. I have listed the organizations above because they are reputable and will be more accessible for the English speaking readers of the blog.  For some ways to help within El Salvador, see the listing in this blog post by Hunnapuh.
Deluge of 2011 Natural disasters

Kelsey said…
Thank you so much for contuining the coverage on the rains. As you have reported, it's hard to find English news on the situation. My husband is down there with his family and I get reports back of how bad it is every day. Thanks again!
8:59 AM