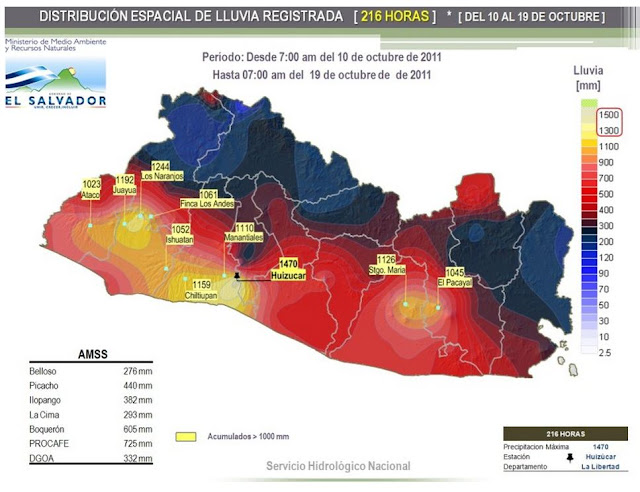 Ten days of rain have produced dramatic rain totals throughout the country as this chart from El Salvador's weather service, the SNET, shows.   The most rain has fallen at Huizucar in the south central part of the country, where an amazing 1470 millimeters (57.9 inches) of rain has fallen.   In a sizable area (orange and yellow on the map), more than a meter of rain has fallen.

The rain was still falling today, with  20-70mm of rain falling in locations in the central volcanic chain in the country.  In Puerto Parada, in the western part of the country, officials continued to evacuate inhabitants as the Rio Grande de San Miguel was rising after having already breached its levee in two places.  Rio Paz in Ahuachapan was also overflowing its banks again.

On Thursday, however, the entry of a cold front is supposed to mark the end of the rains in most of the country.  Next Monday, schools will reopen for the first time since the emergency was declared except for those schools being used as emergency shelters.

President Funes went before the international press today to say that the international community lacked a clear understanding of the magnitude of the crisis in El Salvador and the rest of Central America.  The Salvadoran president blamed part of this lack of international media attention on the fact that the weather conditions creating this calamity lacked a name like "Hurricane Mitch" but instead was "Tropical Depression 12-E."  He emphasized that this unnamed disaster would need an international response similar to Mitch in 1998.    Funes called these 10 days of rain, the most devastating weather disaster in the history of the country.

The tally of the number of people taking refuge in shelters rose significantly today.   The official statistic is now more than 48,700 persons in 566 shelters.