June 01, 2011
Today marks the second anniversary of Mauricio Funes taking power as El Salvador's first left-wing president. An opinion poll from the University of Central America shows that the grades which Salvadorans give Funes have been slipping over those two years, as El Salvador's intractable problems of crime and the economy show little improvement: 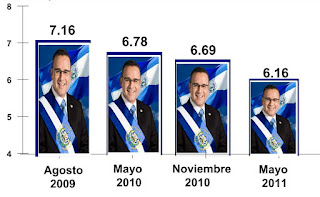 What I find most interesting is the almost identical pattern was experienced by El Salvador's last president, Tony Saca from the ARENA party.   Saca started with a grade higher than 7.2 in UCA polling and was getting a grade of 6.2 on his second anniversary in June 2006.   Salvadorans in 2006, as in 2011, reported crime and the economy as the biggest problems the country faced.  In five years, the number of Salvadorans who feel the country is on the wrong track is still around 65%.

That is not to suggest that Funes and Saca are the same type of president.   After all, Saca laid flowers at the tomb of Roberto D'Aubuisson who ordered the assassination of archbishop Oscar Romero, while Funes apologized on behalf of the Salvadoran nation for that crime.   Saca was overtly partisan and a propgandist for the ARENA party; Funes has shown significant independence from the FMLN.   Saca used anti-poverty programs like Solidarity Net to bestow largesse in areas where ARENA would get political reward.   Funes' administration seems to be targeting its development and anti-poverty efforts more towards where there is need and not necessarily where there are FMLN supporters.  Funes has opened up dialogues on social issues with many sectors of Salvadoran society;  Saca's input seemed to come only from the business sector.   Both presidents have worked to maintain good relations with the US.

The similar tracks of their approval ratings in public opinion polling simply reflect the pragmatism of the Salvadoran people.   Salvadorans want to see their lives improving, and for many years they have not seen that.   While they may value Funes' independence and his reputation for integrity, what they really want to see is results.   And in El Salvador, those results are hard to come by.
Funes Opinion Polls Saca

Carlos X. said…
Was Saca that much of an idealogue? Perhaps if he truly had been, he would not have been disowned by ARENA as soon as he left office. By another measure, Saca was a centrist president, who paid at least lip service to "lo social" (the Salvadoran version of GHWB's "the vision thing") with his Solidarity Network, and he was the first president to openly praise Archbishop Romero. Additionally, Saca's magnanimity towards Funes, graciousness in accepting the FMLN government, made a peaceful transition possible, and that may be his best legacy. In the end, the biggest cloud hanging over Saca's legacy will be an ethical one, and that's one place where Funes may be able to distinguish himself from his predecessor.
12:15 AM

Lawrence M. Ladutke said…
Certainly Funes is different from Saca in many ways. The problem, however, is how closely his public security "solutions" follow the tired, failed policies of ARENA. In many ways, they are more ARENA than ARENA. They may create a nice macho image of being "tough on crime," but they fail to bring results.

Seriously, drafting "at risk youth"??? First, this is clearly aimed at THE POOR. The FMLN Should be ashamed of following in THE TANDONA's footsteps.

Second, if these kids are at risk, then this will bring more gang members into the already corrupted Armed Forces!

Third, what better training for gang members could there be? What skills (besides killing people) will these kids have when their terms are up? What jobs (besides the gangs) will be waiting for them?
9:56 AM

Carlos X. said…
Those are all good points, LML. We have to recall that that the origins of Central American gangs are traced back to discontented civil war militants who could not readjust to civilian life. But, Funes is against the wall here. He HAS to do something. One recalls FDR, who said do something, if it doesn't work, try something else. Or Lincoln who said, if that's your Army, I'd like to borrow it. Etc. This violence is unacceptable. You are quite right that the proposed solution affects the poor, just as the underlying problem is currently assaulting, with am unbearable ferocity, the poor.
10:38 AM

Lawrence M. Ladutke said…
Unfortunatley, FDR also said that Somoza "may be a son of a bitch, but he is our son of a bitch." Funes's crime policy seems to be following that line of reasoning. Yes, do something. But do something SANE.
10:59 AM

Esmerelda777 said…
In some ways El Salvador faces a common problem with disenfranchised youth much like families in the U.S and other countries continually face: young men out of work, getting in trouble, who do not want to or cannot continue schooling. “What to do with Junior?” they ask themselves. “Ah, let's put him in the ARMY!”, is one solution.

But this problem is massively confounded in El Salvador thanks to poverty and the gang problem. And gangs don't just 'invite' kids to join - they are known to FORCE membership and kill youth who don't join.

Regarding two concerns against the obligatory service: 1) Violation of Human rights.
After learning about the human rights violations of literally TENS of thousands of people day in and day out by the GANGS thru extortion, threats, and murder, I am significantly less concerned about the human rights of some 5,000 youth. TV news here, every night: "a couple was murdered", "two church-going paramedic twin brothers were murdered", "a 15 year old girl was killed" and left roadside. It’s a horror show.

2) Gangs infiltrating the army/govt connections. Old news. Gangs already have police bribed and likely strong-armed with threats to kill their families. I myself share the ‘infiltration’ concern, but feel the benefits far outweigh the risk.

Taking youth off the streets and putting them into a program that teaches them discipline, structure, hard work, and skills they would not have had prior to the 2 year army service, sounds good to me.

Were El Salvador well-funded enough to oblige military service to ALL youth of a certain age (read: Isreal), it would be more egalitarian, but there is only so much $ to fund this.

Previous solutions to the at-risk youth problem provided either by Arena and/or well-to-do citizens of El Salvador: mass slaughters of gang members with private mercenaries, otherwise known as a “limpieza” (cleaning).

Short of airlifting these youth in large cargo planes and dropping them in cities throughout the developed world for better opportunities, has anyone a BETTER solution to the gang problem than Funes does?