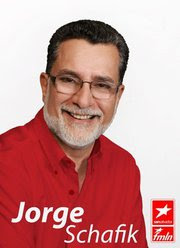 Jorge Schafik Handal is currently a deputy in the National Assembly from Usulutan.  He will be running against the current mayor of San Salvador, Norman Quijano from ARENA, who won his first term as mayor in 2009.
2012 Elections Politics

Korla said…
Wow - Quijano is ARENA? Puchica. Somehow I got it in my head (I kid you not) that he was Frente. Everything makes so much more sense now. (I was having a really, really hard time wrapping my head around the whole picture.)