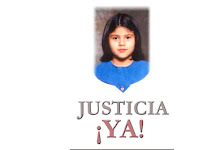 There's a chink in the culture of impunity in El Salvador this week. More than a decade too late, there are finally convictions in the rape and murder of little Katya Miranda. She is the 9 year old girl, killed in 1999 by her grandfather and workers at the family's beachfront property. The grandfather, Carlos Miranda, was politically well-connected with sons who were high officials in the police and army. His first trial ended in an acquittal, which most viewed as a symbol that those with power could still get away with anything in El Salvador.

A campaign led by the Human Rights Institute at the University of Central America, and taken up by Salvadoran bloggers and civil society organizations, demanded justice, and finally in 2009 Miranda and seven others were arrested.

Our friends at the Voices from El Salvador blog summarize this week's convictions:


Twelve years after nine-year old Katya Miranda was kidnapped, raped and murdered, a Salvadoran court finally convicted her grandfather, Carlos Miranda, and five of his employees of kidnapping. The court sentenced Carlos Miranda to 13 years in prison and ordered him to pay $100,000 to Hilda Jimez, Katya’s mother. The court sentenced the others to 8 years in prison and ordered each of them to pay $20,000 to Katya’s mother.

The night of April 4, 1999, Katya and her sister were staying at her paternal grandfather’s beach house in San Luis la Herradura, La Paz. Sometime during the night, she was kidnapped, raped and murdered. Though her grandfather and five of his employees were at the house at the time, the all claimed that they heard and saw nothing. The Attorney General’s Office arrested Carlos and Edwin Miranda, Katya’s grandfather and father, in January of 2000, but the court acquitted them of murder later that year. Shortly thereafter, the Supreme Court ordered the legal process against the Mirandas closed.

The Attorney General’s Office reopened the case in 2003, but did not make any progress until 2009 when they again arrested Carlos Miranda and six others. Because the court had tried Miranda and others for murder in 2000, they could not be tried again. Instead, prosecutors charged them on kidnapping and other related charges, for which they were convicted.

Unknown said…
Hi, Tim. This is the response letter from Charlie Sheen to El Salvador.