December 01, 2010
Today is World AIDS day, and so it's appropriate to focus on the disease and efforts to combat its spread in El Salvador.  This USAID profile offers an assessment of HIV-AIDS in the country:

With less than 1 percent of its adult population reported to be HIV positive, El Salvador is a low-HIV-prevalence country, but the virus remains a significant threat in groups who practice high-risk behaviors, such as commercial sex workers (CSWs) and men who have sex with men (MSM). Overall prevalence has increased since the first case was detected in 1984. El Salvador has the second-largest number of people living with HIV/AIDS (PLWHA) in Central America, behind Guatemala. As of November 2009, 23,731 HIV/AIDS cases have been reported in the country. The Joint United Nations Program on HIV/AIDS (UNAIDS) estimates that in 2007, 35,000 Salvadorans were living with HIV....
Factors that may put El Salvador at risk of an expanded epidemic include early sexual initiation, limited knowledge of preventive practices among people engaging in high-risk behaviors, and the country’s large mobile population. According to the 2008 National Demographic and Health Survey (DHS) among sexually active women aged 15 to 24, the average age to initiate sexual intercourse is 16 years old. Unmarried adolescents face barriers to accessing condoms and are not allowed to get tested for HIV without parental consent. AIDS prevention knowledge remains somewhat limited, as evidenced by the 2010 United Nations General Assembly report, which demonstrated only 52 percent of MSM could correctly answer five questions: two questions about ways to prevent HIV infection and three others regarding common misconceptions about AIDS. Many Salvadorans travel back and forth to the United States for work, and El Salvador has a large migrant population from other countries that travel through the country. Compounding these issues are stigma and discrimination toward HIV-infected individuals and at-risk groups, which can deter people from getting tested and receiving adequate support if they have the disease. On a positive note, 90 percent of CSWs surveyed stated they used a condom with their last client.

As the report states, education and prevention efforts are key. I had the good  fortune last week to observe an excellent workshop on HIV-AIDS for at-risk youth. Approximately 40 youth aged 10-16 gathered in a class room in one of the toughest communities near Santa Ana. This program, led by a presenter who connected well with these kids, provided them with accurate, useful information -- how HIV is spread, how to protect yourself, how to use a condom, how to have self-respect in relationships. There wasn't any doubt that these kids left the room knowing the facts -- but giving them the support and the living tools to make good choices is a longer term process.

The workshop was sponsored by Homies Unidos El Salvador.   Homies Unidos is the organization founded by ex-gang members working directly with gang members, their families, and their communities to improve their situations and to allow the re-integration of gang members into the community. It's tools are ones of empowerment, to give young people the chance to recognize opportunities outside of the gangs and their allure.   I'll have more to say about Homies Unidos in a future post.


Images from the workshop 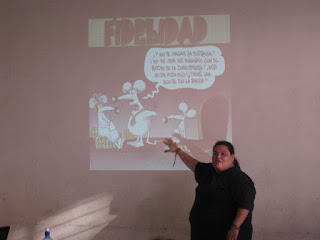 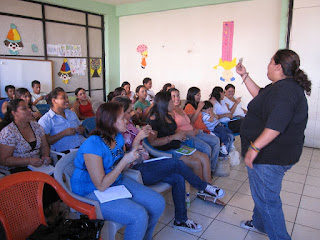 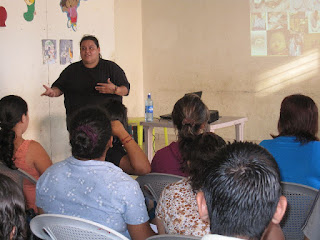 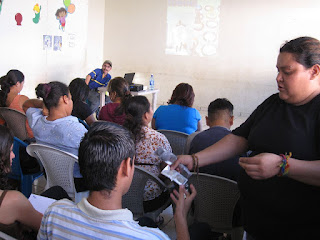 Griselda said…
Wonderful!, to see this kind of work in a religious country! the stigma around it. We should learn from other countries, this kind of workshops should be held at schools, universities, professional associations, organizations, etc.
Knowledge is powerful