December 10, 2010
Whenever the Public Opinion Institute (IUDOP) at the University of Central America releases a new public opinion poll, it's always worth a read.  But there's not much surprising in their most recent poll:  Salvadorans' biggest concern is safety and crime, and Mauricio Funes continues to enjoy high approval ratings as the country's first president from the left.

Answers to questions from the IUDOP show that Salvadorans are pessimistic about the economy.  More than 50% believe the economy worsened and that poverty increased in 2010.   Only a quarter believe that things will improve next year.

Perhaps the most striking result is that Salvadorans believe that the police are doing a good job in combating crime in the country.  60% of Salvadorans polled felt that the PNC has gotten more effective in dealing with crime.  58% believed that the government's security plan was starting to show results.

The annual IUDOP poll always asks respondents which institutions they find trustworthy.  Usually, the highest rated institution is the Catholic church, followed by other institutions.  This year, for the first time, the most trusted institution was the Salvadoran armed forces, with 43.5% of Salvadorans saying they placed much trust in it.  This change would seem to be related to the army's patrols in the streets as part of the fight against crime.

In addition, the LPG poll shows that ARENA and the FMLN continue to dominate the loyalties of Salvadorans who identify with a political party.   As shown in the graph below, the FMLN leads ARENA by almost 10 percentage points 28.3% to 18.6%, with the other parties all below 2%.  What the graph lacks is the off-the-chart number of "none of the above responses" which equal almost 50%.   Most Salvadorans are not party loyalists, but instead are in the middle and mostly concerned about the safety and well-being of their families. 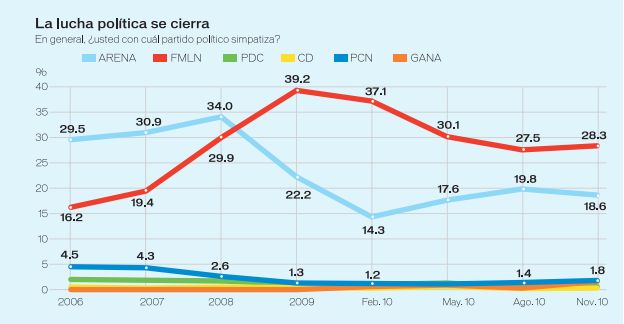