We were driving through a holiday lights display, laughing at the animated images of Santa in his workshop and the bears in the bakery. With the fresh blanket of snow all around us, the lights were especially pretty.

"When you were a little girl, did you celebrate Christmas with the story of Santa Claus?" I asked my friend from El Salvador. It was her second visit to the US - her first time in the snow.

"Yes," she said. "The parents told the children about Santa Claus, but really, the parents made little gifts for their children. We had Christmas trees. The big stores had trees and decorations and you could visit Santa. Now, with electricity in the communities, people put lights on their Christmas trees. Some houses in the community have lights, but not as much as this," she said, pointing out the car window. 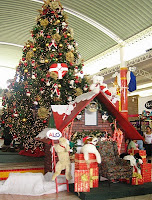 The Christmas traditions in El Salvador are an eclectic mix of pilgrimages to find Jesus and pilgrimages to Metro Centro, of straw reindeer and mangers filled with straw, of golden trees made of tinsel and poinsettias which grow in the gardens along the streets. On one side of La Plaza Barrios people rush by a golden tree with sparkly wise men sponsored by Western Union; on the other 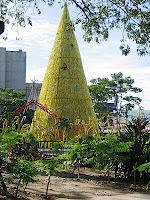 side of the street people quietly kneel in the cathedral and offer prayers beside the wise men who bring sparkly gifts to baby Jesus.

One of my friends once had a job in a sweatshop, sewing white furry trim on to red velvet skirts, making "Christmas dresses for little girls in the United States, like Santa's helpers," she had told me. 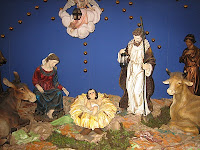 Some of the Christmas decorations in El Salvador strike me as really funny - the snowman at the airport, the big hat at the mall, the parade of straw reindeer marching along the sidewalk. Others are very sweet - the tree at the guest house decorate with gold-painted tortillas, the little decorated pine tree in a coffee can at a friend's house.

Home-made ornaments next to shiny ones from the store. A real tree in a pot next to the plastic one with the LED lights. The story of Baby Jesus and the story of Santa Claus. Gifts of faith and presence. Gifts of special things and presents. Across miles and language and culture, we have a lot in common. 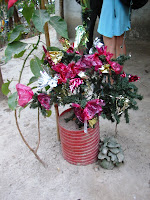