Members of a Salvadoran environmental organization travelling to meet with the Guatemalan government to protest a gold mine were kidnapped and robbed by men wearing Guatemalan police uniforms. They are members of the Center of Investigations into Investment and Commerce (CEICOM) and were travelling with journalists from Salvadoran TV Channel 10. They had been driving to Guatemala City to discuss the risks to bodies of water shared by Guatemala and El Salvador if a proposed gold mine is developed. After their cameras and computers were taken from them, the activists and journalists were left on an abandoned farm.

The proposed mine is the Cerro Blanco mine in the department of Jutiapa, near the municipality of Asuncion Mita. The Cerro Blanco project is being developed by the Canadian mining company GoldCorp. GoldCorp. mining activities in Guatemala and elsewhere in Latin America have been the subject of numerous protests by environmental and civil society organizations. 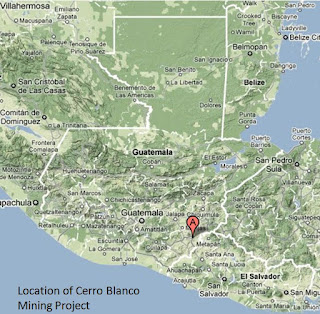 This was the second time members of CEICOM were kidnapped on their way to a meeting in Guatemala regarding the Cerro Blanco mine. On July 30 of this year, the same thing happened as they drove in Guatemala to a meeting with that country's Human Rights Ombudsman.

CEICOM delivered a letter to El Salvador's foreign minister, demanding the the Salvadoran government spur a complete investigation into these events. The foreign ministry has agreed to send a diplomatic request to its counterparts in Guatemala urging a thorough investigation.

The concerns of environmental activists about Cerro Blanco were described in this IPS news story earlier this year:


The Cerro Blanco gold and silver mine in the southeastern Guatemalan province of Jutiapa, on the border with El Salvador, is under fire from environmentalists in both countries concerned about the threat it poses to the shared Lake Güija and rivers on either side of the border.

"Toxic waste water from the mine will be discharged into the Ostúa river in Guatemala, and will flow into the 45 square kilometres of Lake Güija, and on into the Lempa river, the main river basin in El Salvador," David Pereira, a Salvadoran activist with the non-governmental Research Centre on Investment and Trade (CEICOM), told IPS.

The Cerro Blanco mining project, approved by the government of former Guatemalan president Óscar Berger (2000-2004), is now under construction and is expected to start producing gold and silver later this year.

The Salvadoran Catholic Church has also expressed its concern about the mine, and asked El Salvador's leftwing President Mauricio Funes to intervene.

The assault on the CEICOM members is likely to increase the visibility of Salvadoran concerns about this proposed mine in neighboring Guatemala and any potential threats to El Salvador's most important watershed. Anti-mining groups in El Salvador are already planning their next round of actions.
Mining

Rhina Corado said…
Thank you for publishing. Great blog
7:59 AM