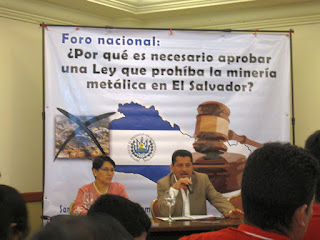 A law to prohibit metallic mining in El Salvador got important support today, as a deputy in the Salvadoran National Assembly from the GANA party announced GANA's support of the measure. Dozens of representatives of civil society organizations had gathered for a forum titled "Why is it important to approvae a law that prohibits metallic mining in El Salvador?"  A panel presentation included two legislators from the Assembly's Commission on the Environment and Climate Change. The position of Lourdes Palacios, deputy from the FMLN, was already known to the assembled group. The FMLN supports a mining ban. But audience members clapped loudly when Juan Carlos Mendoza of GANA announced that his legislative faction would also support a prohibition of mining for gold and other metals. GANA has 14 deputies in the National Assembly and their support along with the 35 FMLN deputies is easily enough to pass the bill.

Also appearing at the forum was Anita Cortez from the office of the Human Rights Ombudsman Oscar Luna (PDDH). Ms. Cortez expressed the support of the PDDH for such a ban, stating that the ban was a necessary part of implementing and protecting fundamental human rights to health and water. She expressed criticism of the government for never having acted to obtain redress for environmental damages caused by the Commerce Group mine in San Sebastien, La Union.

Dr. Angel Ibarra of Unidad Ecológica Salvadoreña (UNES), opened the forum with a lengthy critique of the actions of mining companies and his view of the environmental threat gold mining would pose to the country.
Mining