Youth seek to interact with government to combat violence

August 30, 2010
Reducing levels of crime in El Salvador needs participation and cooperation of all sectors in society. A positive example of how the government can engage with the citizens on the topic of security was a forum on "Youth and Violence" organized by young people in Cabañas last week.

From their press release about the event:

The Youth of Cabañas Conduct a Forum Against Violence and the Criminalization of Youth in the Country.

The Department of Cabañas joined the celebration of International Youth Year with a forum called "Youth and Violence" which took place in Sensuntepeque - Cabañas - Wednesday 25 August, with the aim of establishing the young person as an actor conscious of his or her reality but at the same time being able to offer opinions and solutions to their problems.

The uniqueness of this event is the leading role of the youth sector, not only in organizing the forum, but also in the development of the themes on: Public Safety and Human Rights, generation gap, social challenge and criminalization of youth.

The event involved over 600 young people from the Department, in order to be part of the analysis and proposals for the daily crime afflicting youth living in El Salvador, where they are often criminalized and stigmatized, under the pretext that they are part of gangs which extort and terrorize the population.

Among the invited authorities were the Director of the National Civil Police, Carlos Ascencio, the Assistant Ombudsman for the Defence of Human Rights, Salvador Menendez Leal, the Minister of Justice and Public Safety, Manuel Melgar and departmental authorities. Public officials have the task of listening to the proposals of the youth sector in the search for alternatives to violence and criminality in the country, and of finding ways authorities and youth can work together towards a safer future.

Young people of Cabañas reiterated the need to transform the stigma of the youth sector and to direct social processes of inclusion and participation in the political, economic, social and cultural life as José Martí said: "Let us be worthy representatives of the responsibilities our times entail."

The participation of high level officials from sectors of the government reflects what I have seen as a greater willingness of the Funes administration to engage in dialogue with civil society groups and to get their input on government policies. Hopefully this example can be followed in other areas and on other topics as well. 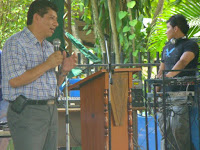 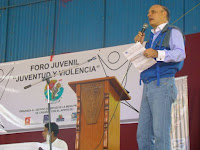 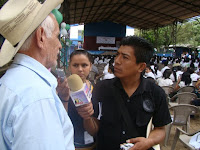 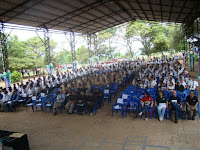 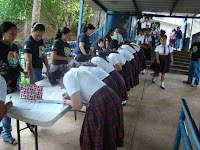