August 27, 2010
I like good travel blogs written by nomad travelers describing their adventures in El Salvador and elsewhere. A few good ones crossed my computer screen this week. Carla and Mike are Road Trippin in El Salvador and write about journeys on the Ruta de las Flores in the western part of the country. Two of the places they visited were Apaneca and Ataco:

Apaneca is a town that looks like it belongs in another century: cobblestone streets, one main church, workshops for furniture makers – very relaxed vibe. The cool mountain climate – a shock compared to Intipuca – adds to the pleasant atmosphere. Our final mountain village was Ataco, which also has cobblestone streets but what makes this town stand out is the color! Many of the homes and shops are painted in fruit colored hues: lemon, lime, melon, orange, strawberry, grape… And if they aren’t painted then they are decorated with fantastic murals depicting traditional life, community heroes, and social issues in vibrant colors. We walked all around town snapping pictures of the different murals and we know that we did not get them all

It’s amazing how art can uplift a place – and turn the ordinary to extraordinary! The town is not rich, it’s a farming community, but it has such vitality, because of the surrounding art. (more)

The travelers writing Mars and Venus revolving around Latin America were in the same parts of El Salvador taking in the weekend food fair in Juayua:

Juayua, El Salvador has this amazing food festival every weekend and this is exactly where we spent our entire weekend. The food and energy that comes from this little village is the best. We arrived to the city later in the day on Saturday to find that about half of the stands surrounding the central plaza had already been closed. There was still more than enough to eat and we came back for much more on Sunday.

First off was fried yucca root served with a topping of pickled cabbage. Delicious and similar to the flavor of a french fry. Next stop was the stand selling chicken tomales for 25 cents. This is the second tomale that I´ve had here in Central America and I´m starting to notice that they like to leave the chicken on the bone when they put it in the tomale. Extra flavor I guess! I didn´t find out until after I devoured it, but my first tomale even had a chicken foot in it, but that´s a whole different story. Lol. As we strolled under the tents, past the hundreds of stands set up for the market, we passed by a girl eating chocolate covered strawberries from a kabab stick. I knew this needed to be our next sample.

The man with the strawberries had a cooler full of frozen kabobs of strawberries and bananas and for topping you could choose from crushed peanuts, shredded coconut, cocoa krispies and multi-colored sprinkles. There was a pot of melted chocolate that the fruit was dipped into and as soon as the warm chocolate covered the frozen fruit, he would dip it in your topping of choice and you would end up with the most perfect chocolate covered strawberries.

You could even get some tasty frogs or snakes: 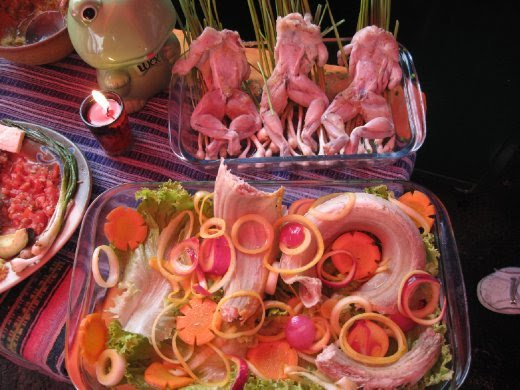 Muhammad Amir said…
Sato Travel Military
Life is just like a burning candle in the wind
10:21 AM

Unknown said…
Nice Post. If you want to more tourism so please Vacation Packages
6:44 AM