August 18, 2010
On November 6, 2009, landslides caused by torrential rains demolished sections of the towns of Guadalupe and Verapaz on the slopes of the San Vicente volcano. Nine months later, I participated in a meeting with leaders of the town of Guadalupe. They spoke of their concerns -- the foremost being that they needed a bridge built as part of an evacuation route. When the rains come again, as they certainly will, flash flooding cuts off the route of escape leaving people trapped for the mudslide which may follow. Meanwhile, families whose homes were destroyed still live in temporary wood structures close by the community, cooking in a community kitchen and using community bathroom facilities.

Guadalupe and Verapaz have a history of suffering from disasters on the folds of the volcano. The February 13, 2001 earthquake wiped out much of the towns, and then in September that same year, a landslide caused by flooding repeated the damage. And then in 2009 the tragedy repeated itself.

The 2009 tragedies were predictable and were predicted. The image below is from the 2004 book Natural Hazards in El Salvador. This image from the book (click on it for a larger version) shows the paths that landslides can be expected to take down the slopes of the San Vicente volcano. Guadalupe and Verapaz are directly in those paths. 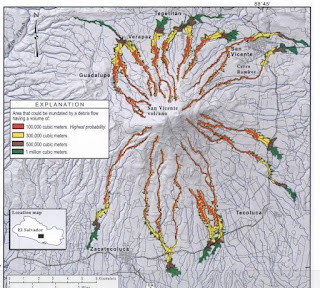 The actual paths of the November 2009 landslides follow the predictions. You can see pictures of the damages caused by that flooding and the landslides in Nick's blog

The government does not want to rebuild in the town of Guadalupe. It wants to resettle the town in a location farther down towards the coast, but the leaders of Guadalupe believe that area is equally likely to flood and is not as good as their milpas around Guadalupe. Besides that, the government wants to break their hearts by insisting they demolish their own houses. The government says if they do not leave, they must sign documents absolving the government of all responsibility for future disasters.

Despite the loss of lives and homes and possessions, and despite the certainty that it will happen again, the people of Guadalupe do not want to leave. They want the government to build a wall and a channel to direct the flowing mud and rocks around the town. They want a bridge to provide an evacuation route if conditions are threatening. They want to rebuild their destroyed homes. They don't want to leave the community where they've lived their whole lives. They tell us they are planning a protest march to broadcast their demands to the government.

It is a difficult problem if you are a government official. Resources are limited. How much do you spend to protect a community in the high risk zone for future disasters? Who performs the cost/benefit analysis? How do you treat people fairly? How do you build trust in government decisions?

This is a story which plays out in various ways across El Salvador as poor people, living in at-risk communities, struggle for safety, dignified housing, and for a government responsive to their needs. You can read my friend Beth's story of another community, declared uninhabitable by the government, and its struggle for a solution at this link.

The victims of the November 6, 2009 San Vicente landslides will not be forgotten. A local musician has committed their memory to song in this tribute to the victims:
Natural disasters