A Russian internet site recently posted the photo above, and also a gallery of other pictures of migratory birds at Lake Suchitlan in north central El Salvador. The photos are a reminder of the ecological paradox which this lake represents. While it is home to many species of birds, both native and migratory, it is also a cesspool of contamination from El Salvador's sewers and factories.

Lake Suchitaln, also known as Embalse Cerron Grande, was formed in 1974 with the construction of the Cerron Grande dam. It represents the largest freshwater body in the country of El Salvador. There is this description of the lake in the Ramsar wetlands database::

Artificial water reservoir that constitutes the largest freshwater body in the country. The reservoir provides relevant environmental products and services such as fisheries production and hydropower generation, water filtration and flood control. The site serves as a place of refuge, breeding and resting ground for several thousand waterbirds, both resident and migratory, and hosts the largest duck populations in the country. Apart from having the largest freshwater fish diversity in El Salvador, it hosts 12 of the 14 native fish species known in the country. Other threatened species in the site include paca (Agouti paca), cougar (Puma concolor), ocelot (Leopardus pardalis) and the Red Brocket Deer (Mazama americana). Water pollution and eutrophication, deforestation, erosion, and the presence of water hyacinth (Eichhornia crassipes) constitute the greatest threats to the wetland.

The threats described at the end of this description have resulted in a horribly contaminated body of water according to this report on the International Ecological Enginerring Society website:

Sources of increased nutrient load usually are untreated waste waters discharging the nutrient rich feces and urine into surface waters. It is estimated that the reservoir Cérron Grande receives a monthly load of more than 8.5 millions pounds (4 million kilograms) of feces deriving from 1.5 million households of the capital San Salvador. Increased nutrient load not only benefits the growth of algae and cyanobacteria but also causes eutrophication of standing water bodies. In its 37 years of existence, the reservoir changed to a hypereutrophic lake promoting by its high nutrient concentrations excessive plant growth and decay, thereby causing anoxia (lack of oxygen in the water) and severe reductions in water quality, fish, and other animal populations.

The rivers Suquiapa, Sucio and Acelhuate, forming 30 % of the flow entering the reservoir, are draining the untreated sewage and wastewater effluent from at least 154 municipal and industrial sources from the metropolitan area of San Salvador. Elevated concentrations of heavy metals such as cadmium, mercury, copper and aluminium were found in the water as well as in different water plants and fishes. Heavy metals are accumulating in the organisms and, therefore, concentrating along the food chain. The last link in the food chain, such as humans, receives the highest concentration of the toxic substances. (more)

As a result, scientists have puzzled why such a polluted body of water could attract so many birds. It would take a serious effort in pollution control technology and sewage treatment to reverse the contamination of this lake. El Salvador's public and private sectors lack the resources and the will to make any real change in the near term. 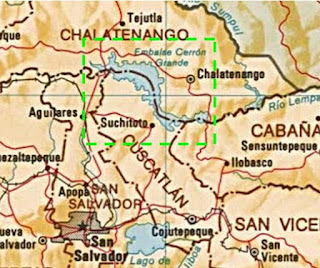 And yet silly people keep saying we need more State control and interference in El Salvador.

El-Visitador said…
This comment has been removed by the author.
8:03 AM