More troops to the streets as violence continues unabated 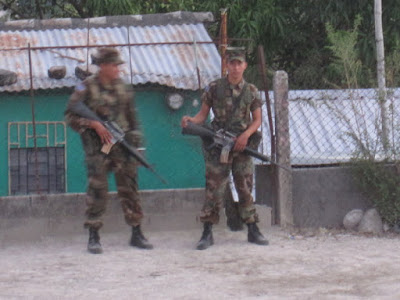 Troops stand watch at the dedication of a new church
in a poor community in El Salvador.
The headlines of the past ten days provoke feelings of insecurity for everyone in El Salvador. As just some examples:
There have also been riots in the prisons over the past week, with three prisoners killed and authorities not in control.

The presence of troops in the streets has produced no reduction in the level of homicides or extortions afflicting Salvadorans. With 1063 murders in the first three months of the year, the country averages 12 homicides a day.
The Funes administration has been impotent to reverse the tide of violence in the country. Searching for a step to make it look like he is doing something, Funes announced that he is prepared to expand the role of the army in public security matters. For the past six months, some 4000 troops have been providing additional support to the National Police in high crime areas. Funes indicated that he will be giving the army new tools to be more effective and that their new roles may include the country's prisons.

A longer term approach was shown as the government launched a violence prevention program focused on youth in 76 communities in the greater San Salvador area. The program, funded by funds from the European Union, aims to benefit 350,000 youth and to recover public spaces in local communities. President Funes called it the most ambitious youth violence prevention program ever launched in the country.